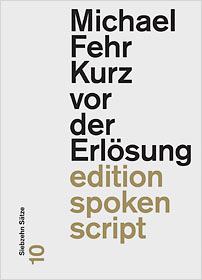 Michael Fehr’s debut is one of the most original and exciting contributions to contemporary German-language literature in recent years. The Verge of Release is already a literary sensation that is thrilling critics and audiences alike. It won the Bern Literature Prize within weeks of its publication and has also been shortlisted for the Franz Tumler Prize for the best debut novel.

The Verge of Release defies categorisation along the usual literary lines. Fehr himself calls the book ‘Seventeen Sentences’ and the beautifully crafted chapters become a roundelay which tells a version of the Christian Nativity story. Each ‘sentence’ is told from a different perspective, with the focus on a different location and on a different individual or group of people: the farmer, the king, the foot soldier, the hunter, the men’s choir, Joseph and Mary. Sentence by sentence, line by line, word by word, the narrator closes in on the central event from all these different angles. In the lamplight the farmer makes an unexpected discovery in his stable; at the inn a male choir bursts into song; a king follows a star in the sky; and someone who appears to be a fisherman contemplates the icy water. Most of the chapters close with the sound of cathedral bells ringing or with cries of Hallelujah. Recurring phrases and motifs – repetitions and variations – as well as wonderful images and brilliant use of rhythm, sound and humour help to carry the reader on a breathtaking journey.

The extraordinary appeal of Fehr’s writing can be partly explained by its stunningly beautiful poetic sound. Recurring phrases and images are woven into the narrative and imbue it with a haunting splendour. Fehr achieves an almost hypnotic hold on his readers through his musical diction and rhythmic repetition. This effect is a product of the author’s style of composition: instead of writing, Fehr speaks and listens and then records the fragments which come to make up the novel’s ‘sentences’. Only then is the text transcribed. Each sentence extends over several pages, with line breaks which help to convey the wonderful rhythm by suggesting the intended phrasing and pacing.

Audiences have been captivated by Michael Fehr’s readings, and readers – whether reading aloud or quietly following the text – find themselves transported by this exquisite story of many voices as though they were listening to an orchestral concert.

Michael Fehr was born in Muri near Bern in 1982 and resides in Bern. Fehr played the drums for thirteen years, took percussion classes and studied business and law, but never got his degree. He then studied at the Swiss Literary Institute and at the College of the Arts in Bern, where he finished his MA in Contemporary Arts Practice. He has been part of numerous events such as the Berner Biennale and the Berner Literary Festival and has been frequently published in magazines and journals. His first publication Kurz vor der Erlösung was awarded one of the literary prizes of the canton Bern in June 2013. Fehr is one of the five authors nominated for the Franz Tumler Prize 2013. Awards and grants include the Literatur-Mentoring – Kanton Bern, the Werkbeitrag der Abteilung Kulturelles der Stadt Bern and theBEST – Trächsel-Stipendium zum Berufseinstieg.

Menschenversand is a publishing house fraction of Spoken Word and was founded by Matthias Burki and Yves Thomi (until 2007) in 1998. The flourishing Menschenversand survives to this day. In 2006 Menschenversand was awarded the Canton of Bern’s Förderpreis für Kulturvermittlung, and in 2007 it received the Migros-Jubilée- Award in der Sparte Literatur.