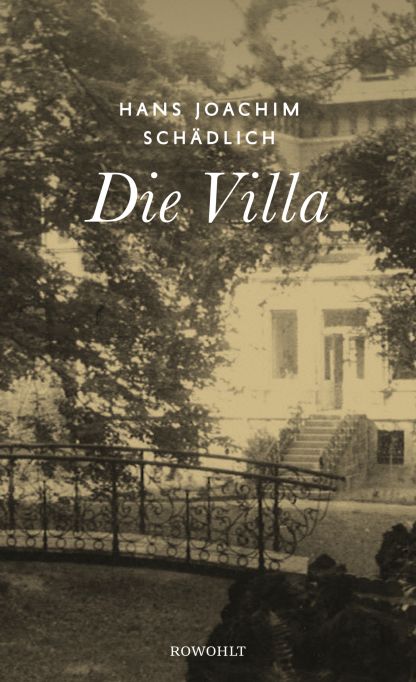 Hans Joachim Schädlich’s exquisite novella follows the fates of the occupants of a grand turn-of-the-century house in Germany during the 1930s and ’40s.

The Villa is an insightful portrait of small-town lives in Germany prior to and during the Second World War. Well written in crystal-clear prose that is both unassuming and understated, the novella sheds light on the actions and motivations of ‘ordinary’ German citizens during the Nazi period. Schädlich focuses on the impact of historical events on the individual characters’ lives.

Elisabeth Kramer (née Ruttig) – the tenth child in a family of eleven children – didn’t want to get married or have children herself. She wanted to finish school, learn something useful and go out into the world. But instead, her father sends her to secretarial college. She falls pregnant aged eighteen, marries Hans Kramer – a Jewish man – in April 1931, and gives birth to baby Georg in September. Hans Kramer had ambitions to study business, but his father had other ideas and Hans ends up working in a pharmacy owned by his father before entering his father-in-law’s wool business. Hans joins the National Socialist Party in 1931 and strenuously denies his Jewish identity to all his business associates. In 1940, the Kramers move with their four children into the villa of the novella’s title in the Saxon town of Reichenbach.

The novella documents the Kramer family’s ups and downs alongside the political and military developments of the Second World War. When Hans dies of a lifelong heart defect in 1943, Elisabeth is left struggling with the upkeep of the villa, unable to afford the expensive heating bills or pay the caretaker. She decides to sell the house, and in May 1944 it is bought by the German Red Cross. After the end of the war, the house changes hands again when the Russian military administration dissolves the German Red Cross and the villa passes into the ownership of the Saxon provincial administration. The Kramers continue to rent the villa’s upper floor until 1948.

The Villa consists of numerous vignettes composed of short, simple sentences that create a clear and precise narrative account. This pared-down, minimalist writing style makes for a satisfying reading experience in which the story is told as much by excluded and unspoken details as by the written narrative. The Villa shares the appeal of Jenny Erpenbeck’s highly successful novella Visitation, which chronicles twentieth-century German history through the fate and ownership of a house near Berlin.

Hans Joachim Schädlich was born in 1935 in Reichenbach and worked at the German Academy of Sciences in East Berlin before resettling in West Germany in 1977. Today, Schädlich once again lives in Berlin. He has received many accolades for his work, including the Heinrich Böll Prize, the Hans Sahl Prize, the Kleist Prize, the Schiller Memorial Prize, the Lessing Prize, the Bremen Literary Award and the Joseph Breitbach Prize.