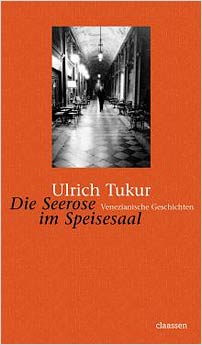 ‘An infinite amount has been written about Venice’, writes the author in his foreword to this stunning debut collection of short stories. ‘If it were not for the fact that the city is sinking into the lagoon of its own accord, it would surely be forced under water, to be washed away, under the weight of the myriads of words attempting to depict it and describe it’.

It is a bold author who, if this is his view of things, is prepared to risk his all in adding still more to the load, but Ulrich Tukur is such a one and he succeeds triumphantly, weaving together the threads of these seemingly autobiographical stories and using Venice, or rather a sort of platonic idea of Venice, as his loom. The characters and situations he describes are fresh and real, while simultaneously managing to be both fantastical and old-fashioned, and range from the quaint and stereotypical to the utterly bizarre and from the historical to the contemporary. Among the things and people featured are fierce, opera-singing puppets, a giant Easter Egg, the narrator’s dog Benny and that animal’s symbolically disintegrating ghost. Then there are the Italians themselves, not only Venetians but also Sicilians and assorted country-dwellers, as well as the narrator and his loved ones, whom one feels one is getting to know increasingly well with each page one turns. Throughout, the reader is never quite sure what to take as fiction and what as fact. The shifting boundary between the two is well summed up in a remark by a certain Loredan, named later on as the narrator’s favourite waiter at his favourite Venetian restaurant but which Tukur sees fit to place at the very beginning of the book and which runs: ‘A lie is a lie, a hundred lies are half a truth’.

From a family heirloom dating from the 1850s to Russian tango-singing of the 1930s and a folk song of the present day, the topics range wide, and the beautiful photographs of Venice itself and of the subjects of each story are an added enhancement. The launch of a golden gondola?

Ulrich Tukur was born in 1957 in Viernheim. He studied German, English and history before going on to train as an actor at the Theatre Academy in Stuttgart. While still a student he acted in Michael Verhoeven’s film Die weiße Rose (‘The White Rose’), and later the Deutsche Schauspielhaus in Hamburg under the direction of Peter Zadek became his artistic home. He was most recently seen in Florian Henckel von Donnermarck’s film Das Leben der Anderen (The Lives of Others) which won the Oscar for Best Foreign Film. Tukur lives in Venice with his wife, the photographer Katharina John. This is his literary debut.

Ullstein Buchverlage was founded in Hamburg in 1934 by Eugen Claassen and Henry Goverts. Although claassen was successful with commercial bestsellers such as Gone with the Wind in 1937 the focus has always been on literary fiction. Herman Melville was discovered for German readers by Eugen Claassen, as were Cesare Pavese, Elsa Morante and others. 1973 marked the beginning of a decade of Nobel laureates including Patrick White (1973), Eyvin Johnson (1974), Odysseas Elytis (1979) and William Golding (1983) In 2001 V.S. Naipaul went on to continue this tradition. In 2003 claassen was acquired by the Swedish media company Bonnier and moved to Berlin as part of the Ullstein publishing group comprising the imprints Ullstein, Propyläen, claassen, Econ, List, Marion von Schröder, Allegria, Ullstein Pocketbook and List Pocketbook.