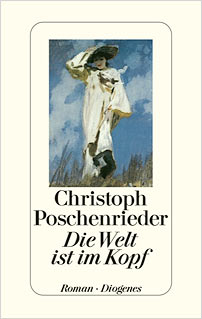 This wonderfully sensitive and lively novel centres on the philosopher Arthur Schopenhauer’s first journey to Italy in 1819 at the age of thirty one, having just completed his magnum opus The World as Will and Representation. Both respectful and playful at the same time, Poschenrieder makes the most of the exhilarating detail of the celebrated thinker’s life.

Schopenhauer leaves Dresden after an argument with the publisher Brockhaus, who had failed to print The World as Will and Representation on time. On his way to Italy he meets Fidelis von Morgenrot, a man who shares Schopenhauer’s fascination with the Hindu scriptures, the Upanishads. But their admiration of Brahman life and the rescue of a horse is enough to raise the suspicions of Chancellor Metternich’s secret police. When they reach Venice Schopenhauer makes friends with a dog (his love for animals and poodles in particular is legendary), has a love affair with a young Italian girl called Teresa Fuga, masters the art of the gondolier, and is constantly on the run from the Austrian secret police.

Alongside this pursuit of Schopenhauer’s adventures, the reader is given a glimpse into the life of the aging Byron – awaiting the publication of his Don Juan – whose physical abilities no longer stand up to his reputation as a passionate lover and revolutionary. The novel plays with the accepted view of that relationship by suggesting that it is Byron who needs to meet up with the inspiring young Schopenhauer rather than the other way around. But Schopenhauer does not use his letter of introduction, written by Goethe himself; instead, when he sees Byron riding past, he is overcome with jealousy over Teresa’s excitement at seeing the poet. His envy wins out and he does not take advantage of the letter. The young Schopenhauer loves life and women, hates bigotry and inhales life as only a philosopher of his kind is able to, all of which is reflected in the way that Poschenrieder approaches his topic with a sense of humour, making for an amusing and at the same time informative book.

The author’s admiration for the philosopher shines through on every page, and the novel will be unrivalled in opening the fascinating world of Schopenhauer’s thought to a general audience, just as Daniel Kehlmann did for Humboldt in Measuring the World.

Christoph Poschenrieder, born near Boston in 1964, lives in Munich. He studied Philosophy in Munich, and wrote his thesis on Schopenhauer. He also attended the Journalism School of Columbia University, New York. Poschenrieder has been working as a freelance journalist and documentary film maker since 1993, and since 2001 he has also been writing instruction manuals for computer software. The World in the Head is his first novel, and he is already working on the next one.