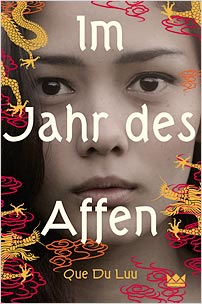 The Year of the Monkey takes a poetic yet light-hearted look at the difficulties of being different and fitting in, mirroring some of the author’s own experiences of growing up in Germany and her family’s flight from Vietnam during the Vietnam War.

Que Du Luu’s characters are so life-like they are almost tangible. Living in Germany, sixteen-year-old Mini has lost most of her connection to her Chinese heritage; she is a so-called ‘banana’. As the reader, we are privy to her inner thoughts – although she doesn’t think of herself as Chinese and can’t eat with chopsticks, most people judge her by her appearance. She is embarrassed by the fact that her father speaks broken German, eats noisily and chews with his mouth open. Mini, a typical teenager in many ways, helps out grudgingly in the family’s restaurant. It is only when her father suffers a heart attack that she realises the toll that working late every day of the week has taken on him as he struggles to make ends meet. Her eyes are also opened to the harsh reality for many immigrants: both the restaurant’s cook and busboy are in Germany illegally without work permits and are obliged to live in cramped, unsanitary conditions.

Mini’s perspective changes again when her Uncle Wu comes to visit from Australia. Outspoken and with an opinion about everything, Uncle Wu comments that Mini’s Chinese isn’t up to scratch, that her father isn’t strict enough with her and that the reason why the restaurant isn’t booming is because they don’t have any guardian lions at the entrance. Uncle Wu also has constructive criticism to offer based on his experiences of running a business in Australia. The more time Mini spends with her uncle, the more she learns about the family’s escape from Vietnam and the many sacrifices involved. She hears how they tried to dock in Singapore and weren’t allowed off the ship, how they spent a year in a camp in Thailand and how many people were tricked into spending their life savings on the journey. Uncle Wu and other members of their family were some of the fortunate ones who made it all the way to Australia. The story closes on a hopeful note, looking towards the socio-political changes that should ensure a better future.

Mini’s story of growing up with a dual sense of identity is thoroughly engrossing and the novel is a real page-turner with universal, international themes that will resonate with an English-language readership.

Que Du Luu was born in 1963 in Saigon in a Chinese family. At the end of the Vietnam War she fled with millions of other people via boat. Her family runs a Chinese restaurant in Bielefeld, Germany. Que Du Luu has been awarded the Adalbert-von-Chamisso Prize and the Hohenmser Literature Prize. The Year of the Monkey is her first children’s book.