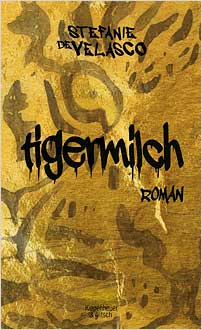 Stefanie de Velasco was born in 1978 and studied European Ethnology and Political Sciences in Bonn, Berlin and Warsaw. In 2011 she received the Literature Prize Prenzlauer Berg for the first chapters of her debut. She received several writing scholarships. She lives and works in Berlin.

‘Tigermilk’ is the signature drink of two teenage friends. Nini and Jameelah hide their heady concoction of brandy, milk and passion fruit juice in Müller milk cartons in order to fool unsuspecting adults. Stefanie de Velasco’s exciting debut novel is as intoxicating as tigermilk, but its pleasures are longer lasting.

Nini and Jameelah believe that nothing can go wrong as long as they are together. They invent a world governed by their own rules, in which friendship takes the place of family. Bold and fiercely independent, both girls have had difficult upbringings. Nini’s father left years ago and her mother spends most of her time asleep on the couch. Jameelah is an Iraqi refugee whose father and brother were killed in the war, and who now faces deportation after receiving a letter from the German authorities. The girls pledge to live life to the full in what might be their final summer together. In the last week of school before the holidays, they meet in the toilets each afternoon to mix their tigermilk before heading into downtown Berlin. There they go to the red light district to pick up men, a new pastime which earns them extra cash and lets them ‘practise’ having sex. When fourteen-year-old Nini puts a condom on with her mouth for the first time the taste reminds her of the chewing gum that she once picked up off the floor as a child – and in the act of remembering the gum she realises that she is not a child anymore.

In what feels like an endless summer the scenes are redolent with the scent of sun lotion, French fries and sex. Things become more intense when the girls witness a stabbing in a playground involving their neighbourhood friends which Jameelah believes to be an honour killing. Their friendship is tested by their disagreement about whether they should tell the police and the once promising summer crumbles around them. By the time the summer holidays finish, everything has changed forever. When Jameelah is sent back to Iraq and Nini says goodbye at the airport, she realises that all the happiness she has ever known is contained within that one friendship: its secrets, the conversations and the tigermilk.

Tigermilk approaches difficult issues such as immigration, honour killings, underage sex and teenage pregnancy in a refreshingly bold, unflinching way. This raw and arresting coming-of-age story pays startling attention to the detail of its characters’ lives and achieves a nuanced rendering of a gritty teenage perspective.