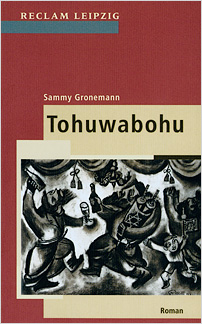 Tohuwabohu is derived from the Hebrew phrase in the Book of Genesis that describes the formless, disordered condition of the world before God’s act of creation. In this closely observed and deftly recounted novel, first published in 1920, the term refers to the confusion felt by many Jews in Berlin at the beginning of the twentieth century about their identity and their ongoing struggle to assimilate. Drawing upon his own experiences as a German Jew, Gronemann’s work is highly amusing in its perceptive observation of the absurdities of the human condition; but it makes for heartrending reading with our knowledge of what was to follow: German Jews fighting for their country in the First World War, only to be persecuted and murdered by the Nazis during the Holocaust.

Gronemann’s narrative alternates between a Jewish ghetto in the town of Borytschew in Russia and the increasingly westernised lives of Jews in Berlin. The somewhat unlikely marriage of Jossel Schlenker, an earnest young Talmudic scholar, to Chane Weinstein, the witty and playful fourth daughter of an infamous Borytschew con-artist, forms a bridge between the novel’s two locations, when the young couple decide to emigrate to Berlin. While they are establishing themselves in the German capital, the Schlenkers encounter the Lehnsen (formerly Levysohn) family who, as newly baptised Christians, are doing their best to distance themselves from their embarrassing Jewish connections. In fact, Jossel Schlenker turns out to be a cousin of the Lehnsens, and his arrival inspires the young Heinz Lehnsen to investigate his Jewish origins. The novel is skilfully balanced by these two narrative threads, describing Eastern Jews in search of a new life in Berlin and an assimilated, baptised German Jew discovering his Eastern heritage.

Heinz Lehnsen embarks on a trip to Russia and arrives in Borytschew on the first day of the Passover festival, when concern is mounting among the Jewish community about a pogrom being planned by the town’s Christian authorities. Just as Jossel Schlenker’s traditional Eastern attire had singled him out in Berlin, Heinz Lehnsen’s modern appearance is a source of fascination in Borytschew, where householders vie to have him at their Seder table as an honoured guest. He chooses to be received at the Schlenker family home and spends a memorable evening in their company. He contrasts the profound contentment within the Schlenkers’ home with the perennial restlessness of life in Berlin. The following day the pogrom begins, with scenes of horrific brutality that reflect Gronemann’s own experiences of the Zhytomyr pogrom in 1905. Heinz tries and fails to stand by the Schlenkers as they wait for the violent mob to reach their house. He is exposed as a Meschummed, a Jew who has been baptised, which precludes him from claiming an identity he has only just begun to know as his own.

Gronemann has a gift for characterisation and the narrative advances through a succession of comic – often satirical – vignettes which provide insights into the lives of the large cast of characters. The reader sees the wide range of Jewish identities in Berlin at that time: newly arrived Eastern Jews who seek to continue their way of life in the city; one rabbi who dispenses spiritual advice in business terms and another who is bent upon playing down religious differences between Jews and Christians; prosperous synagogue-goers who flaunt their wealth; an ambitious swindler-turned-cigarette merchant; a successful toxicologist who does his best to conceal his Jewishness; and second-generation German Jews who have all but forgotten they are Jewish. The Jewish characters’ interactions with other Berlin residents – including minor nobility, conniving district court officials, malicious journalists and self-conscious Jewish converts to Christianity – give form to the ongoing debates in the novel about what it means to be Jewish and how to be true to that identity as a citizen of Berlin. The combination of humorously observed social stereotypes and thoughtfully original characters captures and maintains the reader’s interest in finding out how they live up to the manifold challenges of their daily lives.

The novel’s closing scenes take place on a train journey between Berlin and Switzerland, where Heinz Lehnsen happens to be travelling on the same train as a large group of Jews – including Jossel and Chane Schlenker – bound for the annual Zionist Congress. After movingly describing his self-discovery in Borytschew to a fellow passenger, Heinz nonetheless chooses to get off the train at his appointed stop rather than continue to the Congress, thus symbolically abandoning his Jewish self in favour of social conformity and career advancement at the district court in Berlin. At the end of the novel it is the Zionist promise of a Jewish state in Palestine that offers the most hopeful means of maintaining the Jewish way of life in all its joyously chaotic diversity, which again makes for fascinating reading in hindsight.

This entertaining and thoughtful depiction of the challenges of Jewish life in Europe at the start of the twentieth century continues to receive attention. The 1920 German edition of Tohuwabohu has been republished by BiblioLife in an enlarged print edition to make the text more readily accessible to contemporary readers, and the Austrian public service broadcaster, ORF, produced a radio play of the novel in 2010. There has never been an English translation, but it would be a timely publication, in what is often described as the ‘post-secular’ climate of twenty-first-century Western culture, with its increasingly polarised debates about religious identity.

Sheridan Marshall is a freelance translator and editor.

Sammy Gronemann (1875-1952) grew up in Danzig and Hanover, the son of an Orthodox rabbi. He was wellknown during his lifetime as a lawyer, Zionist activist and satirical writer. Gronemann was legal advisor to the Zionist Organization and president of the Zionist Congress Court before serving on the Eastern Front during World War One. Tohuwabohu (1920) is Gronemann’s first novel. He also published a second novel, Hawdoloh und Zapfenstreich (1924), based on his Eastern Front experience, and several plays. He was prevented from practising as a lawyer in Berlin after 1933 and moved to Paris, before emigrating to Tel Aviv in 1936. His memoirs (Erinnerungen) were published in Germany in 2002 and followed by a subsequent volume in 2004 focusing on his time in Berlin (Erinnerungen an meine Jahre in Berlin).

A new edition of Tohuwabohu was published by
Reclam Leipzig in 2000.

The novel is out of copyright.