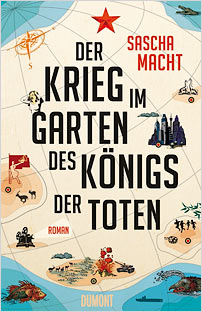 War in the Devil’s Backyard is an impressive, high-concept debut that will appeal to readers of Margaret Atwood and Emily St John Mandel.

Bruno Hildago is seventeen when his parents disappear in the night. Forced to look after himself and make sense of the world, he turns to his collection of poor-quality horror movies. But these are the least of his problems. He is living on a monstrous island that emerged from the depths of the ocean following US atomic bomb testing in the 1940s. Amongst the mountains, plains and jungle, chaos reigns; the island settlers’ dream of a utopian society is long shattered, rewritten by militia, despotic leaders and the criminal underworld.

Macht’s murderous island set in our ‘real’ world enables a dystopian reality to be played out in tandem with our own societal shortcomings; the relentless narrative intensifies the experience. This concept, combined with a coming-of-age story involving the potential healing power of low-budget horror movies, is a rich source of humour and an outlet for Macht’s vivid imagination and elegant use of language.

Sascha Macht was born in 1986 in Frankfurt (Oder). He studied creative writing at the German Institute for Literature in Leipzig and has published his work in literary reviews and anthologies. He is the winner of the New German Fiction Contest 2015. Der Krieg im Garten des Königs der Toten is his debut novel.