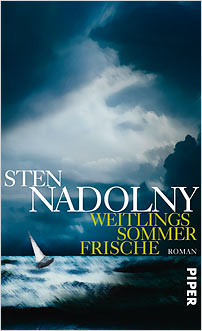 Already an established writer, Nadolny has a proper regard for the insubstantiality of life and a rare gift for recreating it. Weitling’s Summer Holiday is a deftly experimental and highly playful exercise in autobiography.

Retired judge Wilhelm Weitling is alone in his holiday home. Undecided whether to get his boat out for an afternoon sail on the lake, he leaves it rather too late in the day and gets caught in a sudden storm. The boat capsizes and he is knocked unconscious by the swinging boom of the sail. As the first chapter ends, he appears on the point of drowning. We already know that he had a similar sailing accident in the same boat as a sixteen-year-old, and before the accident, Weitling had been daydreaming about the possibility of revisiting his own youth. When the next chapter begins, it becomes evident that Weitling’s daydream has become reality. The narrative perspective has shifted from the third to the first person: Weitling is no longer the observed, but the observer, transported back to his family home and his younger self. So begins an account of Weitling’s ‘summer holiday’ – time out from his ‘real’ life as he takes on the guise of a spirit, revisiting his own past and shadowing himself, observing and recounting the life of the developing teenager that he once was, and the life of the family in which he grew up.

Just as suddenly, the spirit Weitling is snatched back from his ‘summer holiday’. No longer the reckless teenager, he finds himself an old man, back in his sinking boat. When he is rescued and airlifted to hospital, he gradually discovers that he has lived a different life since his youth. He is not a retired judge at all, but a writer; and here it becomes clear that the author has created a character with whom he shares key biographical elements and characteristics. The early career of Weitling the writer exactly mirrors Nadolny’s own: both started as teachers before moving into the film industry.

In this enchanting, whimsical exercise in magical realism Nadolny is meditating on the course of his own life, and wondering why he is a writer, when he could so easily have taken a different course and become someone else. The writing style is wonderfully clear and also very funny in its dry, wry humour.

Sten Nadolny was born in 1942 and lives in Berlin and on Lake Chiemsee. Following his literary debut Netzkarte, his novel Die Entdeckung der Langsamkeit (The Discovery of Slowness) was published in 1983. It was translated into more than 20 languages and became a modern classic of German literature. Nadolny has received many literary awards including the Ingeborg Bachmann Prize and the Hans Fallada Prize.

Piper Verlag was founded by Reinhard Piper in 1904. The firm published many leading contemporary authors, a tradition followed by his son and his grandson. After 1945 the programme expanded to include philosophy and non-fiction. Piper Verlag is well known for its lists in German and international fiction and non-fiction. Authors published by Piper include Ingeborg Bachmann, Sten Nadolny, François Lelord, Arne Dahl, Hape Kerkeling, Sándor Márai, Paul Watzlawick, Markus Heitz and Ferdinand von Schirach. Piper Verlag has been part of the Swedish Bonnier Group since 1995. In 1996 the Piper publishing group acquired the imprint Malik Verlag (literary travel writing, adventure, mountaineering), and now also publishes high-quality fantasy.