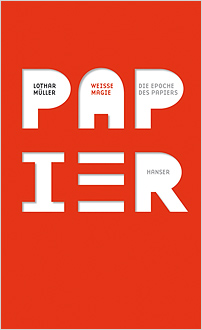 It can be folded, torn or scrunched. We use it for writing, wiping and wrapping. It is a fire-lighter, a news-bearer, and the currency for countless emotional and financial transactions. Why does paper mean so much for human existence? Lothar Müller uses historical and literary vignettes to provide a uniquely creative perspective on a material which is involved in so many aspects of our lives.

From our current vantage point on the cusp of the transition to a digital age, Müller’s history of paper is a timely publication which offers an eloquent consideration of what this shift means, while charting the profound significance of paper throughout human civilisation. Müller’s readers are taken on a journey through the ever-changing faces of the medium. The journey begins with the paper mulberry tree and the development of parchment from animal hides, and moves on through the ‘Gutenberg Era’, to the industrialisation of paper and its mass production based on wood-pulp. We learn of the origins of paper in China and how it came to Europe – via Egypt, Arabia and North Africa – to assume its position at the centre of Western society. Müller’s magisterial survey concludes with the replacement and mimicry of real paper by electronic paper in our own times.

White Magic is a wide-ranging book which describes the continuously evolving social and cultural impact of paper, its ubiquity and structural hegemony. Müller reflects on the role of paper in banks and libraries, post-offices and newsrooms. He discusses postage stamps and punched cards, playing cards and newsprint, paintings and official documents, focusing both on the material objects themselves and on their symbolic meanings within a social context. Müller considers the influence of paper on great writers, including Rabelais, Zola, Balzac, Dickens and Joyce, as well as documenting its portrayal in their works.

Müller’s book distinguishes itself from other accounts of paper, both by virtue of its impeccable literary credentials and by delving deep into paper’s past to anticipate trends in the ongoing transformation of paper-based interaction in the digital future. White Magic is an erudite book which maintains a broad appeal. It contains something for everyone, while also being an important contribution to media studies and to social and literary history.

Lothar Müller was born in 1954 and studied German and History. He was a lecturer of general and comparative literature at the Berlin Free University and worked as an editor for the literary supplement of the Frankfurter Allgemeine Zeitung (FAZ) from 1997 to 2001. Today, he edits the features section of the Süddeutsche Zeitung in Berlin, where he has been an honorary professor at the Humboldt University since 2010. He received the Alfred Kerr Award in 2000 and the Johann-Heinrich Merck Award in 2008.