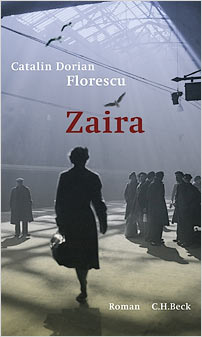 Zaira is a beautifully constructed, sweeping novel, which takes the reader on a dizzying journey spanning countries, continents, major political events and the whole lifetime of the female protagonist, Zaira herself, who is also the narrator. As for the real author, Catalin Dorian Florescu, he succeeds in that most difficult of feats – a male author assuming an authentic female voice. He also avoids the long, intricate sentences one might expect from a work reminiscent in its scope, detail and ambition of a Middlemarch or even a Buddenbrooks. Instead he breaks up his sentences, which in consequence sometimes take on a new meaning retrospectively. Another achievement is the way in which Zaira’s voice matures as she grows older, thus enabling the reader to hear as well as see her development.

Zaira is born into a privileged family of powerful landowners in feudal pre-Second World War Romania. She is virtually abandoned by her mother, who prefers the privileged life of a Romanian cavalier officer’s wife in Bucharest to bringing up a child, and left in the care of her Aunt Sofia, who herself was left by her husband after her only child, Zizi, was born. It is Zizi in fact who is responsible for instilling in Zaira the love of fantasy and story-telling that influences not just her future career, but her whole attitude to life. Also significant is the influence of the child’s pious and austere grandmother, the primary model for the series of damaged, emotionally aloof women who populate the book. No less important are the throng of rustic characters, from Zsusza, the Hungarian cook, to Misa the family’s alcoholic coachman. All these are part of a culture and a way of life that will finally disappear during the Second World War, with the arrival of first the Germans and then the Communists, during and after which the author depicts, through Zaira’s eyes, a whole era of deracination. The tale moves on to America in the troubled 1960s and 1970s and finally back home, where the hectic, switchback fortunes and misfortunes of this strange but spirited woman end.

To belong, to have a home, a class, a culture – this perhaps is the author’s underlying theme. A magnificent achievement.

Catalin Florian Florescu was born in Timisoara, Romania, in 1967, where he spent his childhood and youth. In 1976 his father took him to Italy and the USA, but they returned home after eight months abroad. Six years later, he and his parents managed to escape from Romania to permanent emigration in Switzerland – he is now a Swiss citizen. He studied Psychology and Gestalt Therapy and worked for several years as a psychotherapist in drug rehabilitation clinics. Following the publication of his first novel in 2001, he became a full-time writer. He lives in Zurich.

Rights to this work sold to:
Giunti Editori (Italy)

The Liepman Literary Agency, founded in 1949, represents American, British, Canadian, French and Israeli publishers and agents for German language publication rights as well as international authors for their world rights.

For details about Verlag C.H. Beck please contact the editor.