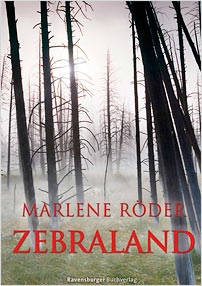 This remarkable teenage novel is, in effect, a thriller with a death at its core. Four young people in a ‘borrowed’ car are driving home from a gig late at night. Anouk, one of the girls, is at the wheel and on the way knocks over a moped rider. The victim turns out to be Yasmin, a Muslim girl, also known as ‘Zebra’ from her black and white head scarf, who is a pupil at the same school. Judith and Ziggi, two of the other passengers, want to call the police, but Philipp, Anouk’s boyfriend, dissuades them, all the more vehemently the next morning when the radio reports a hit-and-run accident in which the victim died on the way to hospital. Judith is so besotted by Philipp that she goes along with his decision and Ziggi, whose mother was deserted by a hopeless husband, cannot bear to think of her being caused any further distress.

At first it looks as if the four will get away with it, but then, to their dismay, the registration number of the car they were driving begins to be circulated all round the school, and soon afterwards each of the four culprits receives a letter, couched in the style of an Old Testament prophet, requiring them to make some public sacrifice to atone for the life they stole. Judith, a runner, must lose an all-important race, Philipp must publicly hand over the editorship of the school magazine to his deadly rival, Anouk must get a tattoo on her wrist and Ziggi must kill a zebra.

Of all their penances, this last is the most dramatic. In his confusion Ziggi has taken Yasmin’s diary from the scene of the accident, and, sitting and reading it by the zoo’s zebra enclosure, learns of the unhappiness caused by her restrictive upbringing. For him the zebra has become Zebra, a person, and he refuses to shoot it. But who sent those letters?

There are lots of red herrings in this somewhat starksounding book, which is, paradoxically, great fun as well as gripping to read. Although recreating the ephemeral world of the teenager is a well-nigh impossible task, Marlene Röder has triumphantly brought it off, both linguistically and with plenty of Bob Marley lyrics thrown in. Proof that this young writer, already reviewed in nbg, was not a one-book wonder.

Marlene Röder, born in 1984, stands out for her exceptional narrative talent. For Im Fluss, her first novel, she was awarded the Hans-im-Glück prize from the city of Limburg, Zebraland is her second.

In 1883 Otto Maier founded the Ravensburger Buchverlag. He was impressed by the new educational ideas of his time and tried to implement them in his books and games. His aim to produce only the best is still the aim of the firm which survived the two World Wars and has grown into an international company. Its output is divided into book publishing and games, with over 1,400 employees in total. It is considered one of Germany’s leading publishing houses and last year saw its 125th anniversary.