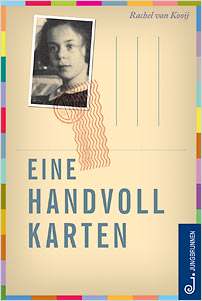 The day before her thirteenth birthday in 1942, as she is pushed into the ‘shower’ at Auschwitz, Leny Goldstein says to her mother, ‘Will the water be cold?’. Decades later all that reminds us of Leny Goldstein is a handful of postcards, received from friends and family and collected in an album. When versatile author Rachel van Kooij finds this album in the house of her Dutch grandparents, who were friends of Leny’s family, she decides to find out more about the girl. The result is this immensely moving collection of carefully chosen scenes from the childhood of a spirited girl with whom, like Anne Frank, teenage readers will quickly identify. A timeline in the corner of each page shows the year and an appendix explains the historical developments.

Together with her younger sister, Leny grows up in the Dutch town of Breda where the sinister political developments of the time are not felt immediately. Only gradually does the perfect world of Leny’s childhood – evolving around school, family visits, seaside holidays and piano lessons – show the first cracks. Then the war begins, the German army invades Holland and the inhabitants of Breda flee from the approaching enemy. For a few, unreal days, Leny becomes a refugee, taking shelter from attacking planes in the trenches along the road. When they are allowed home again, normal life seems to resume under the German occupation, but then the Goldsteins begin to feel the change. Leny’s parents think about leaving, but others convince them that it will all pass. Little consolation for Leny when she is forced to wear the huge yellow star that makes her feel even more vulnerable and stigmatized. When her father is summoned for work duty, all desperate attempts to keep up some kind of normality fail, and not long after that, Mr Goldstein’s wife and daughters are deported as well. For Leny, the joys of the past and the plans for the future are overshadowed by fear and suffering, but even on the gruelling journey in the overcrowded train or in the dreadful barracks of Auschwitz, she doesn’t stop hoping, refusing like many to think the unthinkable.

Already a successful novelist, van Kooij weaves together a narrative that is very moving but never sentimental, shedding new light on this darkest of chapters in recent European history.

Rachel van Kooij was born in the Dutch city of Wageningen in 1968. She moved to Austria at the age of 10, and later studied Special Needs Teaching at Vienna University. She now lives in Klosterneuburg near Vienna and works with handicapped people. She says of herself: ‘I write about the things I like to read about.’

Translation rights sold to:
Previous works have been published in translation in Italy, Japan, Korea, the Netherlands and Spain.

Jungbrunnen was established in 1923 with the aim of providing good literature to children and young people who had little access to books. The publisher’s emphasis still rests on quality, both of text and image, and on taking their young audience seriously. Many Jungbrunnen books have become classics and are already delighting a third generation of children, not least Mira Lobe’s Die Omama im Apfelbaum, which has been translated into 21 languages.