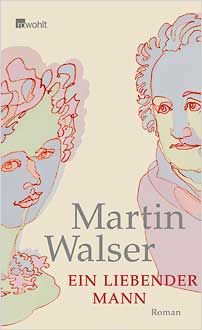 Johann Wolfgang von Goethe is 73 years old, and has fallen in love with 19-year-old Ulrike von Levetzow, his last affair and his great romantic defeat. Starting in the resort of Marienbad and ending at Goethe’s home in Weimar, Ein Liebender Mann captures the rise and fall of the love affair between the ageing poet and the young countess, ending in a refused offer of marriage. It is also the story of the poetry that came out of the affair.

Intensely meditative and full of close personal detail, Walser’s novel is impressive in its depiction of Goethe’s feelings. The poet’s restless mental energy, which never deserted him throughout his life, comes up sharply against proofs of his physical decline, as when he stumbles and falls on a path as he is out walking with Ulrike and feels an unspoken acknowledgement, physically though not mentally, of the age gap of over fifty years between them.

There is much to like about Ein liebender Mann, and Walser’s sheer skill as a writer is evident. A reader with some knowledge of Goethe’s work would glean particular pleasure from this novel, with its respectful echoes of Young Werther and the beautiful late poetry.

A fine modern writer in penetrating and thoughtful mood.

Martin Walser was born in 1927 in Wasserburg and lives in Überlingen near Lake Constance. He has received numerous awards for his literary work, including the 1981 Georg Büchner Prize and the 1998 Peace Prize of the German Book Trade. He has also been awarded the order Pour le Mérite and been named an Officier de l’Ordre des Arts et des Lettres.