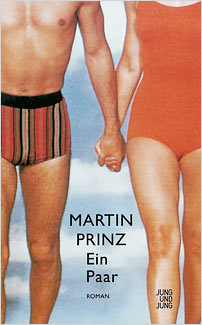 Susanne and Georg seem to have everything going for them: successful careers, a lovely new home in Vienna, and each other. Ein Paar shows the currents that underlie their marriage, the thin cracks of longings and uncertainties. Susanne, now a successful journalist, sets off for Hamburg to cover a story, but finds herself drawn back instead to Lassing, the place where her career took off when she was on hand to cover the story of a miner trapped underground after a landshift. And also the scene of a passionate and illicit love affair which still holds her in its grip. Sebastian was the man she met after marrying Georg, waking in her the longings and love that seem to have vanished from her life. Prinz shows the struggle that rages in Susanne between her loyalty to her husband and her desire for an affair or a new life with Sebastian, juxtaposing this in the narrative with Susanne’s memories of the desperate attempts made to save the trapped miner, a struggle that becomes a symbol of her attempts to draw order out of chaos and to save something especially precious.

Prinz alternates Susanne’s narrative with her husband’s who, while she is away, goes to a dinner party and has rushed and risky sex between courses with Eva, the hostess and his occasional lover. Later, prompted by a mysterious text from his wife, Georg investigates Susanne’s e-mail account and finds a huge interchange of mails between herself and Sebastian which he reads compulsively, and also incredulously. The novel ends with Susanne’s return and with Georg looking at the headlights of her car. This will be their first face to face encounter in the main narrative but it is not described.

This is a novel about secrets, about how passion is expressed in the twenty-first century in texts and emails and the way that longing for what is forbidden can infect a seemingly perfect marriage. A short puzzle of a book that packs a punch by showing rather than telling. ‘When you have experienced love, can you find a way back into marriage?’ it asks, thought-provokingly.

Martin Prinz is considered, alongside Arno Geiger, Daniel Kehlmann, and Thomas Glavinic, as one of the quartet of young male Austrian writers now approaching the peaks of their careers.

Martin Prinz was born in 1973 in Lilienfeld, Austria and studied theatre and German. His debut novel, Die Räuber, was published to great critical acclaim (reviewed in nbg: Spring 2003). He has received three major Austrian literary prizes and lives in Vienna.

Previous works include:
Puppenstille (2003) and Der Räuber (2002), the latter published in the UK by Dedalus Books (On The Run). His work has been translated into French (Editions Absalon, France).

Jung und Jung was founded in 2000 by Jochen Jung, who has been publishing Austrian literature for 25 years. The firm focuses mainly on contemporary German and Austrian literature (novels and poetry) and art (Walter Pichler). Translations are also part of the programme. Jung and Jung’s list of acclaimed authors includes H. C. Artmann, Gert Jonke, Peter Waterhouse and Günter Brus, as well as such up-and-coming young writers as Xaver Bayer, Sherko Fatah – shortlisted for this year’s Leipzig Book Fair Prize – and Ursula Krechel.