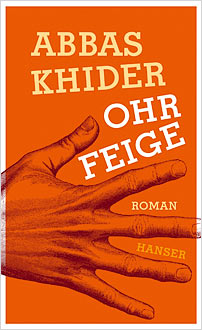 A timely novel which reflects on the contemporary plight of refugees in Europe, A Slap in the Face is making waves in the German literary scene.

Desperate for someone to listen to his story, an Iraqi refugee ties up an immigration authority official and slaps her. After an interminable spell in German asylum institutions, Karim Mensy has just been told that he is going to be deported. Karim had arrived in Germany on a lorry, expecting to find himself in Paris, the supposed destination of his illegal journey across Europe. He then spends three long years being shunted from one institution to another in a maze of bureaucracy, only to find himself faced with deportation. Abbas Khider’s novel is a much-needed exposé of the intolerable situations faced by refugees in the very countries where they are seeking refuge.

The tension builds throughout Karim’s narrative, culminating with his revelation of his true motivation for fleeing Iraq: Karim began to develop breasts during adolescence, and he is convinced that these are the embodiment of a murdered teenage lover inside of him. His shame at this gynecomastia haunts him, and he is horrified by the prospect of mandatory military service. Karim’s father makes arrangements for him to flee the country and his life as a refugee begins. Karim reports on his experiences of being detained and questioned on German soil, of living in uncomfortably close quarters with other asylum-seekers and of his complete alienation from the public. Khider portrays the desperate circumstances in which refugees are condemned to live, where opportunities are so limited that many are forced into illegal activities.

A Slap in the Face is a highly original book in both its style and content. The author’s own experiences as a refugee in Europe following his flight from Saddam Hussein’s regime in 1996 contribute to his nuanced and thoughtful portrayal of refugee life. Khider’s exploration of gendered power systems, the dynamics of bureaucracy and body dysphoria are all compelling and his treatment of his characters is consistently sympathetic, eschewing voyeurism or judgment. The reader is spellbound by the unusual relationship between Karim and his captive listener and the novel acquires a gratifying sense of urgency from the sense that Karim is always withholding some crucial information that will give meaning to his story.

Abbas Khider was born in 1973 in Bagdad. At the age of seventeen he was arrested for political activism. In 1996 after his release he fled Iraq and stayed in various countries with illegal refugee status. He has been living in Germany since 2000. He studied literature and philosophy in Munich and Potsdam. The publication of his debut novel Der falsche Inder (2008) was followed by Die Orangen des Präsidenten (2011) and Brief in die Auberginenrepublik (2013). He is the recipient of several awards, most recently the Nelly Sachs Prize and the Hilde Domin Prize. Abbas Khider currently lives in Berlin.