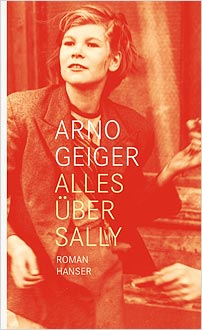 ** ‘All about Sally’ is Book of the Month for November 2010 on Litrix.de, including a review and sample translation in English **

Sally and Albert have been married for over thirty years, have three grown-up children, modest careers and a pleasant house in a leafy Viennese suburb. It is only when that house is burgled that this charming surface is peeled back to reveal something rotten. Thus a story of marital breakdown develops into an engrossing tale of characters in free-fall, victims of the freedom that no previous generation has enjoyed. The novel owes its universal feel to an opening in England (Sally is half-English) and flashbacks to Egypt in the seventies; but above all to Geiger’s focus on the intricacies of his characters’ everyday lives – as Sally and Alfred battle with the aftershocks of the break-in and its interruption of their comfortable existence.

Their relationship is unstable from the outset, their apparent incompatibility beautifully portrayed in the opening scene in an English B&B, which has Alfred, still in his pyjamas, peeling back his orthopaedic stockings to examine his sweaty, wrinkled skin and the protruding veins that make him feel so close to death; while Sally is full of vitality, preening herself at the mirror and desperate to get out into the fresh air. We learn later that this dynamic has defined their relationship since they first met in Egypt: Sally a helpless – even heartless – flirt and Alfred a hypochondriac curator specialising in Egyptian archaeology. Alfred wants nothing more than the comfort of knowing, and is happy to mine the past for these facts but fearful of facing an uncertain future; while Sally is chronically curious and dissatisfied with the status quo, in a quandary that is – Geiger suggests – shared by her whole generation. The women who came of age in the late sixties have no blueprint for their behaviour in later life, when the constancy that is expected of them slips easily into boredom. Sally begins an affair with one of Alfred’s friends, but this expression of her own freedom does not solve her problems.

By painting a portrait of this conflicted woman, Geiger has created a living and breathing image of the troubles of this new generation: for with free choice comes the sting of indecision and the anguish of responsibility. The novel is thus more about why couples stay together than why they separate – a difficult and neglected question that Geiger
approaches with style and compassion.

Arno Geiger was born in 1968 in Bregenz and now lives in Vienna. He was the first recipient of the German Book Prize (2005) and has also won the Friedrich Hölderlin Prize (2005) and the Johann Peter Hebbel Prize (2008). Alles über Sally is his sixth novel.