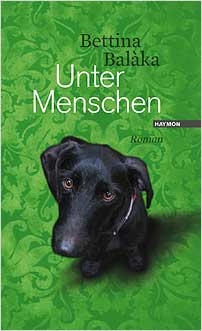 This humorous yet bitterly sad novel explores the difficulty of establishing and maintaining our connections with others.

The novel follows the first few years in the life of a dog, Berti, and gives the back-stories of the various people who briefly own him. His first owners are the Hungarian Alexandra and her teenage daughter Gréta, who falls head over heels in love with the puppy. But while Gréta is at school one day, Alexandra packs Berti off to the Michaleks, a retired Austrian couple who re-home dogs to soothe the pain of an empty nest now that their children no longer live at home. From there he is passed on to Marcel, who is depressed after being tricked out of his savings by a Brazilian woman he had fallen in love with on holiday. After a stint in the pound, Berti is chosen by Lydia Prinz, whose ex-husband has kidnapped their five-year-old son Oliver.

The book is filled with warm humour, which is counterposed with moments of dry-eyed sadness. The narration from inside Berti’s head comically presents his miscommunications with his various owners and shows his good-natured attempts to follow the rules and signs as he interprets them. There is nothing facile about the characters’ fates, and yet Balàka perfectly matches this with her wicked comedic streak.

Bettina Balàka was born in 1966 in Salzburg and lives as a freelance writer in Vienna. She has published numerous novels, plays, and radio plays. She was honoured with the Theodor-Körner- Preis (2004), the Salzburger Lyrikpreis (2006) und the Friedrich-Schiedel- Literaturpreis (2008).
www.balaka.at

Haymon Verlag was established in 1982, and is named after the ‘Giant Haymon’ who, according to legend, founded the Stift Wilten monastery near Innsbruck in the eighth century. The monastery was one of the first cultural centres in the region that later became known as the Tyrol. Since 1988, Haymon has primarily published Germanlanguage and international literature, and has been a subsidiary company of the Studienverlag since 2004.