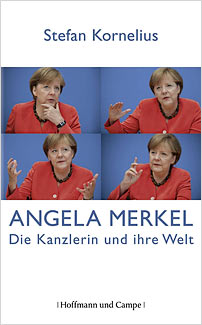 Angela Merkel is one of the most powerful women in the world. Stefan Kornelius – a highly regarded political journalist in Germany for over twenty years – has personally known and worked with Merkel since the start of her political career in the ’90s. As a first-hand witness to her meteoric rise to power, his biography sheds light on Merkel’s phenomenal political career, made all the more remarkable by the fact that she spent the first thirty-five years of her life in the former East Germany.

This is a thought-provoking and extensively researched analysis of Merkel’s life, both in the GDR and in reunited Germany. We learn how she dealt with reunification, how fast she learned to adapt in the West and what she has carried over from her former life. It covers her position in world politics as well as during the ongoing Euro crisis. Kornelius describes Merkel’s fascinating transition from citizen within an autocratic regime to leader of a major democratic power, while preserving the humanistic values shaped by her upbringing as the daughter of a Lutheran pastor. Kornelius illuminates Merkel’s strengths and weaknesses, her astute way of finding her feet in united Germany’s politics, her remarkable analytical acumen and systematic way of working, her straightforwardness, openness and honesty.

The emphasis of this biography is on Angela Merkel’s personal and political relationships, as well as on her outstanding qualities and idiosyncrasies. Merkel’s relationships with other world leaders, particularly in China, Israel and Europe, are considered in detail. Her pragmatism in dealing with fundamental policies and issues is based on a solid political philosophy guided by the core values of freedom and tolerance. Kornelius considers Merkel as someone who thrives under pressure, and the Euro crisis of recent years has seen her position strengthened rather than weakened, partly due to her remarkable memory, her detailed grasp of complicated processes, her robust constitution and her sometimes mischievous sense of humour.

Even though she has been in power for nearly eight years, there is no biography of Merkel in English as yet. Angela Merkel is an engaging read by an accomplished biographer which will appeal to a broad readership.

Stefan Kornelius was born in 1966 and is head of the foreign policy department of Süddeutsche Zeitung. He met Merkel for the first time in 1989 in East Berlin when she was the Speaker of the Democratic Awakening. Later Kornelius was a correspondent in Bonn where he was responsible for the CDU party, and where Merkel was a minister in Kohl’s Cabinet and served as an important source for Kornelius. After years working as a foreign correspondent in Washington, Kornelius returned to Berlin in 1999 – just in time for the CDU funding scandal and Merkel’s rise to the head of CDU party. Since 2000 Kornelius has been responsible for foreign policy reporting and is in close contact with the Chancellor and her main advisers.

Hoffmann und Campe was founded in 1781 and is one of Germany’s largest and most successful general publishers with a portfolio that embraces the works of famous authors and young talents. Since 1951, all works by the eminent writer Siegfried Lenz have been published by Hoffmann und Campe. Hoffmann und Campe also holds world rights to authors such as Irene Dische, Matthias Politycki, Nicol Ljubic and Wolf Haas. The non-fiction list includes Stefan Aust, Joachim Bauer, Gerhard Schröder, Helmut Schmidt and Peer Steinbrück