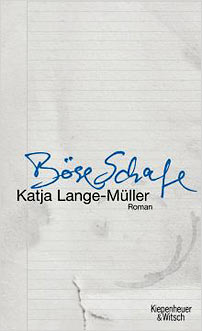 Like the author herself, Soja, the anti-heroine and narrator of this fine author’s latest novel, grew up in the German Democratic Republic and like her can claim a mother who was a card-carrying Communist. We first meet her during her early months in West Berlin, but whether she left the GDR of her own free will or because she was expelled we are not told. She only makes clear that she doesn’t take herself too seriously. Then she meets Harry by chance in the street, gets to know him little by little but never completely, and falls in love.

But what is Harry really like? Reader and narrator discover together that he spent ten years in jail for armed robbery, that he is on probation, that he is an ex-junkie, and that he is in danger of being put back inside. Not exactly a pleasing prospect. Yet Soja, in the midst of her own drinking, casual sex and hassles with the police, beyond all reason decides to help him. Love can indeed be blind, and Soja’s certainly is. The first time she is confronted with the reality of Harry is when his social worker tells her that he is HIV positive and even that she lets go. At night, when they curl up together in asexual tenderness, another side of him appears. He admits her into parts of his life refused by him to any previous girlfriend while she, on her side, stifles her instinctive mistrust. At the end, when he is dying, she decides to start a new life in idyllic Switzerland, a well-nigh surreal contrast to the badlands of Berlin. But even there she remembers ‘how I was all those years ago, younger, prettier, and usually with you’.

Set in 1987, it tellingly evokes the West Berlin of that moment (the moment also of the first appearance of AIDS) but would fit into the ‘urban’ genre of British writing no less naturally. The underlying tone of melancholy, of looking back, is tender, while the language is vibrant, alive and inspired and the reader is left convinced that, despite her humour and sarcasm, Soja’s unhappy love affair was indeed the happiest time of her life.

Katja Lange-Müller was born in 1951 in East Berlin, where she was expelled from one school for her ‘un-socialistic behaviour’. She worked for four years at the East Berlin newspaper Berliner Zeitung, followed by six years of care-work in women’s psychiatric wards in Berlin before she went to Leipzig to study literature at the Johannes R. Becher Institute. There followed sojourns in Mongolia where she studied and also worked at the Wilhelm-Pieck carpet factory in Ulan-Bator. In 1984 she crossed to West Berlin and the city remains her home today. She has won some of the major German literary prizes including the Ingeborg Bachmann Prize, the Alfred Döblin Prize and the Kasseler Literature Prize (awarded for grotesque humour).