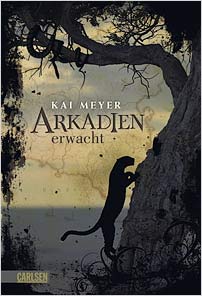 Seventeen-year-old Rosa Alcantara is on her way to Sicily from New York, where she has lived with her mother throughout her teenage life, to meet up with her sister Zoe and Aunt Florinda at the ancestral home of her deceased father. Rosa’s tough appearance, replete with metal-cap boots, reflects the struggle of growing up a street-wise girl in Brooklyn where money was short and stealing commonplace.

She is instantly drawn to the wild Sicilian landscape and the Palazzo Alcantara, a gothic but shabby palace set high in the hills of the Sicilian hinterland. Walking in the expansive gardens she glimpses what seems to be a tiger. As the funeral of Baron Massimo Carnevare approaches – he is the capo of his clan and father to the young man Alessandro who holds a fascination for Rosa – she is introduced to the world of clans and the Sicilian Mafia and tries to make sense of a murky world of business, her aunt’s incredible wealth, and the rivalry between the two families.

When Alessandro gives Rosa a leather-bound copy of Aesop’s Fables and invites her to the island of Luna, Rosa is catapulted into something that goes beyond even her most troubled imaginings: an imprisoned girl, relatives murdered for betrayal, lions, panthers, snakes, and tigers, humans in animal form, caves in the Sicilian hills full of ancient secrets, a mysterious old man who seems to hold the key to unravelling the whole, and who howls at night, greed, love, a taste for blood, and the power of the myth of the vanished empire of Arcadia with its belief that the ancient King Lykaon, turned into a wolf by a wrathful Zeus, is still alive in animal form and will return one day. What is Rosa’s role in the unfolding drama, who is the black panther, and is it her fate to open wide once more the narrowing rift between the families?

In a plot full of intricate twists and turns, Kai Meyer, who captivated readers with his Flowing Queen trilogy, proves once again that he is a pastmaster of fantasy. Readers will warm to the feisty female character, the compelling Sicilian backdrop, and the gritty Mafia scenes all deftly interwoven with those of ancient mythology. This page-turner leaves one hungry for the next helping of the trilogy.

Kai Meyer was born in 1969. After studying film and theatre at university, he worked as a journalist before devoting himself to novels. He has since published over fifty titles, including numerous bestsellers, and is recognized as one of the best fantasy writers in Germany. His works have been adapted as films, comics and radio plays, and have been translated into twenty-seven languages.