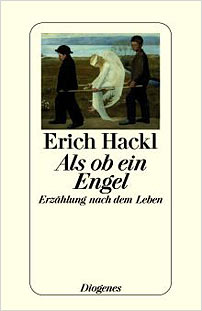 The Austrian writer Erich Hackl is a student of his country’s working class and Socialist movement and also a Hispanicist, and in the past his books have linked these two interests. So does this new one. The central figure here is the absent Gisela Tenenbaum, a young woman who joined the Monteneros, the left wing youth movement of the Peronist party, when a military junta seized power in Argentina in the early 1970s. In the ‘dirty war’ that followed this group proved no match for the brutal repression carried out by the armed forces. Thousands of left-wingers and their sympathisers disappeared without trace, whether buried in unmarked graves or dropped from planes over the South Atlantic. And this is a recurring motif of the book – the burden of uncertainty on family, friends or former comrades who survived. As one character testifies: ‘The worst thing is, one can’t even bring you a flower’.

Gisela (a real person) disappeared when she was twentytwo. But the story doesn’t begin in the city of Mendoza, in the foothills of the Andes, where she grew up, but rather in Vienna, which her Jewish and Socialist parents and grandparents managed to leave after the Anschluss. The novel alternates a montage of conversations about the family and about Gisela’s childhood, adolescence and education with fictionalised chapters about her own and her associates’ lives on the run. Even when she has gone underground her parents, both trained doctors, continue to help her, and indeed the underground movement itself.

What should we make of the risks Gisela took and the sacrifices she made? Should we see the course of her young life solely as tragic? In the act of reviving that life Hackl offers some encouragement. ‘Only that historian’, he declares, ‘will have the gift of fanning the spark of hope in the past who is firmly convinced that even the dead will not be safe from the enemy if he wins. And this enemy has not ceased to win’. One of the younger generation carrying on the 1960s tradition of Germanlanguage documentary literature, Hackl, who has already achieved considerable success in translation, is a writer and historian of this sort.

Erich Hackl was born in Steyr in Austria in 1954. He studied German and Spanish, then taught at the Universities of Madrid and Vienna. He now lives as a writer, editor, translator and journalist in Vienna. He has received several prestigious literary awards in Austria, France, Germany and Spain including the Prix Ecureuil de littérature étrangère, the Solothurner Literary Award and the Prize of the Austrian Bookselling Trade for Tolerance in Thinking and Acting. His stories are often based on authentic cases.