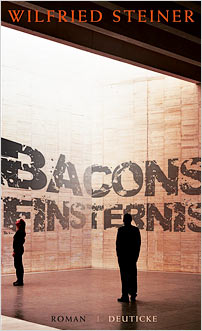 Not only is Steiner’s new crime novel a thoroughly original and engaging read in its own right, it also serves as a fascinating introduction to the life and works of the artist, Francis Bacon.

Our narrator-protagonist is Arthur, the owner of an antiquarian bookshop in Vienna, whose emotional life as a reluctant divorcee is bleak, and who soon develops an obsession with the disturbing works of Irish-born painter Francis Bacon.

For weeks after his wife leaves him, Arthur leads a reclusive life, having little contact with anyone besides his business partner, Maia. Later he attends a Bacon exhibition and is transfixed by a sequence entitled Triptych, May-June 1973, depicting a man’s death. This is the first of the novel’s many outstanding descriptions of Bacon’s works, which are captivating both for the gruesome voyeuristic detail of what they describe and for the way in which they reflect the emotional and psychological state of the novel’s central character. Arthur becomes absorbed in researching Bacon’s life and work but finds that seeing the original paintings provides the only relief for the loss of his wife. This prompts him to travel to Bacon exhibitions across Europe. In London’s Tate Gallery Arthur is shocked to see his ex-wife, with another man whom he recognises as a customer of his bookshop. He overhears a fragment of their conversation which leads him to suspect they may be planning to steal one of Bacon’s works.

The plot twists and turns as Arthur and Maia penetrate further into the murky criminal underworld of art dealing. Their mission is driven by Arthur’s jealousy and his continued desire to win his wife back, and their burgeoning friendship provides a further dimension to the plot as details of Maia’s carefully guarded personal life and early artistic career are gradually revealed.

The climax of the novel occurs with Arthur’s discovery of a long-lost portrait – not the picture he was originally seeking, but the object of a high profile investigation following its theft in 1988 and much sought after by artists, art collectors and detectives alike. Alongside its thrilling and suspenseful plot, Bacon’s Eclipse provides a fascinating perspective on the British art scene in the twentieth century. A fast-paced, exciting and thoroughly rewarding novel.

Wilfried Steiner was born in Linz, Austria in 1960. He studied German, English and American Studies in Salzburg and then combined working in various Austrian cultural centres, such as the Salzburg Literature Cafe, with his own writing. He has been publishing since 1985, and since 1999 has been Artistic Director at the Posthof, an arts centre in Linz, Austria. Steiner is the recipient of numerous prizes.