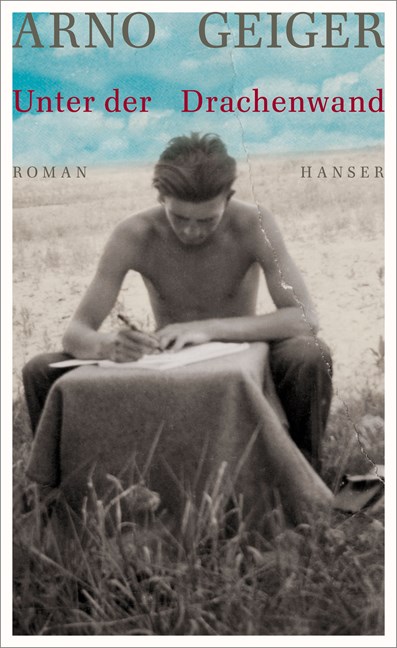 This fresh, vital novel composed in Arno Geiger’s well-crafted prose is exquisite literary fiction from a writer at the top of his game.

It is spring 1944, and having been seriously wounded in battle, Veit Kolbe is sent home to recuperate. He goes to visit his uncle, the local police commander in the Austrian village of Mondsee. Jaded by five years of war and suffering from PTSD, Veit has no sympathy for Nazi ideology. He manages to avoid being sent back to the front for almost a year and falls in love with Margot, a married woman with a baby, who has travelled to Mondsee to escape the bombing in Darmstadt. The village lies in the shadow of the Drachenwand, a rock-climbing area that claims the life of a thirteen-year-old girl from one of the evacuee camps in the region.

Veit’s first-person journal account is interspersed with letters from Margot’s mother, from the dead girl’s sixteen-year-old boyfriend, and from a Jewish man who has narrowly escaped from Vienna to Budapest with his family. These secondary characters also appear in Veit’s journal as their paths cross to varying degrees. The cumulative effect of their stories creates a chorus of voices from the peripheries of war – stories of the relatives lost to bombing, the schoolboys forced to man anti-aircraft stations in the final months of fighting, the scarcity of food and the attempts at normality in the midst of turmoil and violence. Veit eventually returns to his regiment, promising Margot that he will do his best to stay alive and come back to her. A brief afterword continues the fiction that the novel is a collection of real documents, summarising the post-war fates of all the book’s characters. Some – notably Veit and Margot – find happiness and lead long lives; others don’t live to see peacetime.

The fascinating setting of Hinterland, showcasing the strange normality of village life in the midst of war, as well as the unusual viewpoint of the central character, is captured in Geiger’s subtle, evocative prose. The book calls to mind All Quiet on the Western Front, eliciting sympathy for men whose young lives have been put on hold to fight a war they have no interest in. Geiger’s sympathetic depiction of his characters’ domestic, everyday existence as the world falls apart around them also recalls Alone in Berlin by Hans Fallada. Hinterland is primed to capture the imaginations of a whole new readership.

An English-language review of Hinterland from Literaturhaus Wien is available here:

Arno Geiger was born in 1968 and now lives in Vienna and Wolfurt. Recent works include Der alte König in seinem Exil (The Old King in his Exile, published by And Other Stories) and Selbstporträt mit Flusspferd (2015). Geiger has been awarded numeous prizes, including the Hebel Prize (2008), the Hölderlin Prize (2011), the Literary Prize of the Adenauer Foundation (2011) and the Alemannischer Literaturpreis (2017). In 2005 he was the rst ever recipient of the German Book Prize for his novel Es geht uns gut.