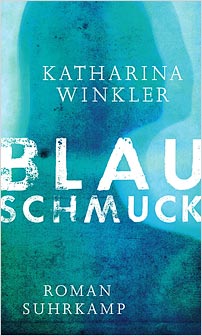 Katharina Winkler’s powerful debut tells the harrowing story of a Muslim woman from an intensely rural, patriarchal Kurdish society who emigrates to the West. Based on sixty hours of interviews, Blue Jewellery combines reportage with fiction to produce a first-person narrative that will stay with readers long after they have finished the book.

Filiz grows up as one of ten siblings in a Kurdish village in Turkey where every woman is adorned with the blue jewellery of the title: bruises inflicted by their husbands. Denied a secondary school education by her father, Filiz runs away with an older boy called Yunus. They flee to his mother’s house where they get married. She is fourteen. After their marriage Yunus beats Filiz and has sex with her whenever he likes, while she effectively becomes a servant to him and his cruel mother. One day Yunus beats her unconscious and hangs her in the barn. She survives only because the mother finds her and cuts her down. Over the next few years, she has three children. Yunus is often away for months at a time, while Filiz lives inside and sees no one except her children and her mother-in-law, of whom she is afraid. Filiz’s life narrows into drudgery and beatings.

Eventually Yunus moves to Austria and sends for them to join him. Once in Austria, Filiz starts to have more contact with the outside world. Kindly neighbours notice her situation and help her with small amounts of money. Yunus continues to beat her and the children and has a string of girlfriends. Filiz starts to consider suicide, and when she is hospitalised after one of Yunus’ beatings, she wants to die. But the children come and bring her home. From that point, she passively resists Yunus, simply lying there and not responding no matter what he does. When Yunus delivers his worst beating yet, breaking her arms, ribs, nose and both upper and lower jaws, she recalls the book’s subtitle: ‘You can beat me to death, but you can’t touch me.’

We learn in an epilogue that Yunus is then forced to return to Turkey. Without him, Filiz gets an education and teaches at a university. Her children become a teacher, a lecturer and a civil servant. Yunus remarries and has three more children, whom he gives the same names as the first three. This tightly focused account of prolonged domestic abuse deserves the widest possible readership, not least because it gives voice to the most appalling suffering of a kind that is ongoing in millions of homes across the world.

Katharina Winkler was born in Vienna in 1979 and studied German philology and theatre studies. Blue Jewellery is her debut novel. The author lives in Berlin.