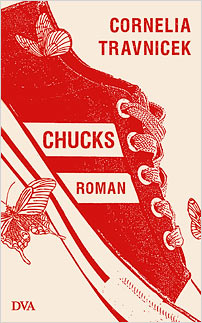 Chucks is a startlingly honest and simple novella from a promising young writer.

Travnicek tells the story of Mae, a young woman growing up amidst family tragedy and trying to figure out who she is and what she wants. At times she seems strikingly self-assured and mature, and at others vulnerable and foolhardy. When the narrative begins she is living with Jacob, a dependable and predictable man who leaves her feeling restless. Subsequent chapters jump back in time to recount the death of her brother and her parents’ separation. Mae begins to spend most of her time with a group of homeless teenagers sleeping rough on the streets. One of them becomes a companion to her, and she alternates between sleeping out with her and sneaking her home to her childhood bedroom. She gets into drugs, and a run-in with the police leads to her being compelled to do community service. She takes work at an AIDS clinic where she is initially bitter and scornful of the patients for, as she sees it, taking risks. Then she meets Paul, one of the patients, and begins to fall for him. Nothing happens at first but later, after leaving Jacob, she visits him at his apartment and soon moves in with him.

The novella’s style fits very well with Mae’s personality – the prose and dialogue alternate between tender and hard-hitting as the reader is exposed to the full honesty and intensity of her thoughts. Mae takes Paul to meet her mother for Christmas dinner. Realising that her mother is happy to see her starting to live a more respectable life, and seeing the scene through her eyes, she shatters it brutally by announcing casually that Paul has AIDS and will soon die. Harsh words, and yet the reader can empathise with Mae; her relationship may look like a fairytale from the outside, but she wants people to know the reality. Mae stays with Paul right to the end, struggling to understand the ease and resignation with which he seems to prepare for his death. After Paul’s death, we find her back with Jacob, the two of them living in Paul’s apartment, which he left to her. Like many, she just doesn’t like being alone.

The author’s approach and style are pared down and powerful. This is an impressive work and Travnicek an exciting young voice on the scene.

Cornelia Travnicek was born in 1987. She studied Chinese Studies and computer science and now works as a researcher in the Centre for Visual Reality and Visualisation in Vienna. She has been awarded various scholarships for her publications and a number of awards, such as the Theodor Körner Promotion Prize (2008) and the third place in the 2009 Wortlaut Wettbewerb, the most important prize for young talent in Austria.
www.corneliatravnicek.com

Deutsche Verlags-Anstalt was founded in 1831 and has published works by many leading writers, scholars and architects, as well as politicians and journalists from Germany and Europe, either in book form or within the pages of one of its journals. The DVA books’ section alone feature works by twelve Nobel prizewinners, four German Federal Presidents and thirteen German Chancellors. Today DVA’s reputation for publishing quality literature is based on its editions of work by poets such as Paul Celan, Sarah Kirsch, Doris Runge, Ulla Hahn and C.W. Aigner; by novelists such as Joyce Carol Oates, Carlos Fuentes, Sibylle Lewitscharoff and Thomas Rosenboom; and of André Gide’s diaries and Marcel Reich- Ranicki’s essays.