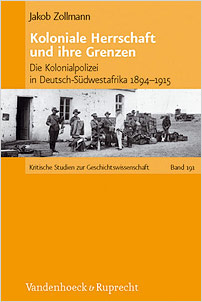 Before its defeat in 1918, Germany had been active as a colonial power. Jakob Zollmann sheds light on the limits of that involvement by examining the colonial police force in German South-West Africa. The force was the interface between the colonial government and the indigenous population. How was this police force organised? What did it do? What was it unable to do, and why? The author answers these questions using in-depth source analysis. The German colonial government was weak. It covered only a minority of its territories, succeeding instead in forming small islands of statehood. Even in these cases, it was always dependent on co-operation with the local inhabitants. For this reason, the author rejects any attempts to trace the origins of the Nazi Holocaust back to German colonial policy in Africa. The colonial empire that the National Socialists wanted to enforce in Eastern Europe was of a completely different nature.

Dr Jakob Zollmann studied history and law in Berlin, Paris and San Francisco and now works as a corporate lawyer.