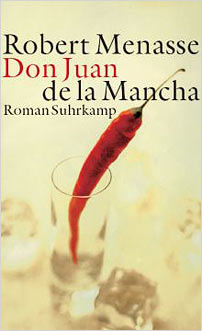 ‘I first understood the beauty and wisdom of celibacy when…’. But we won’t go on with the remarkably outspoken and saucy details of the scene then acted out, except to say that it involves hot chillis rubbed between the lady’s hands, and that’s only for starters. Nathan, our narrator, is a moderately successful Austrian lifestyle journalist and the lady is the lover of his late middleage. In this novel, or memoir, he reviews his past with a sort of ironic melancholy, his life a series of escapades that go wrong, or nearly wrong, and come right, or nearly right, in the manner of Zeno in Italo Svevo’s Confessions, on which it could have been based. Troubled by his inability to find real pleasure in anything, he consults a psychoanalyst, the all-too-motherly Hannah, and the novel darts back and forth in memory, as in psychoanalysis it would.

His father he remembers as a bit of a libertine, taking him on holiday and introducing him to women with fishnet stockings and fake eyelashes, or leaving him to read in his room while he disappears with his conquests. Mother’s various lovers include one who could conjure cigarettes and felt-tip pens from his hat, but beat up his mother and was later killed outside a pub. Later we learn that Nathan shared a bed with his mother until he was seventeen. Interspersed with these memories are accounts of Nathan’s relationships with the girls he managed to persuade back to his grimy flat – Barbara the thirty-year-old secretary who introduced him to voluptuous sex, and shy Helga whose virginity he took but was surprised when there was no blood, which raises the question, is the hymen a petit-bourgeois invention? Then in middle age, when he thinks it is time to settle down, he attends a lecture by an old-time leftist and meets a cloakroom attendant, except she isn’t a cloakroom attendant but works in fashion. And so on and so forth.

Get it? It’s a life half lived, very compelling and insanely readable, and Menasse, author of Die Vertreibung aus der Hölle (‘Expulsion from Hell’ – nbg Autumn 2001), that revelatory tour de force, is a skilful, witty and perceptive writer to whom it is time British readers were introduced.

Robert Menasse was born in Vienna in 1954. After studying German, Philosophy and Political Science he taught for seven years at the University of São Paulo in Brazil. He is now a freelance author living in Vienna and Amsterdam. Robert Menasse was chosen to give the opening address at the Frankfurt Book Fair in 1995 when Austria was guest of honour. He has received many prizes for his novels and essays.

Suhrkamp Verlag was founded in 1950 by Peter Unseld who was joined in 1952 by Dr. Siegfried Unseld. The group now includes Insel Verlag (founded in 1902 in Leipzig), Deutscher Klassiker Verlag (established in 1981) and the Jüdischer Verlag (founded in 1902). Suhrkamp focuses on both contemporary literature and the humanitites. Its distinguished list includes leading writers from Germany, Switzerland and Austria, many of whom made their debuts with the firm, besides major international authors including four Nobel Prize winners.