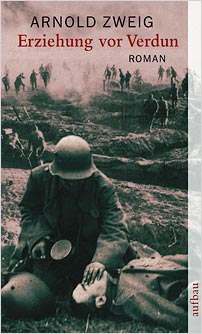 Among the many authors who published works about the First World War in the 1920s, Arnold Zweig (1887-1968) was instantly recognised in Britain as one of the best novelists writing on the subject in German. This reputation was based on The Case of Sergeant Grischa (1927), in which the story of an escaped Russian prisoner of war, unjustly condemned to death on suspicion of spying, had provided Zweig with the basis for an expansive inquiry into what the war had meant – morally, socially, and politically – for the German nation. In a series of further novels Zweig went on pursuing that inquiry for the rest of his life. Zweig had himself served in the German army, initially in the Service Corps in Belgium, Serbia, and at Verdun, and subsequently in the Press Office of the High Command in Eastern Europe. He emerged from the war a convinced pacifist, a radical socialist, and a Zionist. More than any other of his novels, Education Before Verdun (1935) shows us why.

The ‘education’ it depicts is that of a young writer, Werner Bertin, who comes across as the author’s alter ego. At the start he believes his country is fighting for a just and humane cause, and welcomes the sense of social integration that army life seems to bring him. During six months’ service at Verdun, however, he is gradually stripped of his illusions. He is singled out for personal humiliation as an intellectual, as a person with aesthetic and moral sensibilities, and as a Jew; and he witnesses the vindictive treatment of others at the hands of their vain and authoritarian superiors. A perceived troublemaker can be easily despatched by posting him to a dangerous part of the sector, or he can be made to suffer indefinitely by punishing his unit collectively for his insubordination.

The fighting around Verdun in 1916 is remembered in Germany as epitomising the war of attrition, just as the Battle of the Somme is in Britain. For that reason, too, Verdun had been the preferred setting for a string of nationalistic German war novels that appeared around 1930, where it was presented as a terrible proving-ground for those who were destined to survive as a new warrior caste. Zweig counters that propagandistic approach by exposing the protracted warfare as wasteful, brutalising, and ultimately futile, and against that background he presents his own characterisation of a natural-born warrior. The charismatic Lieutenant Kroysing, who exerts a considerable fascination on Bertin, is as undeluded about the hollowness of patriotic phrases as he is fearless amid the devastation of the battlefield. Kroysing is a patriot in his own cause, a fearsome individualist who uses his intimate knowledge of the terrain and the fighting conditions around Verdun to enhance his own authority and influence, and to pursue vengeance for his brother, who is eliminated as a troublemaker early in the plot. But like a number of other figures who make strong impressions on Bertin as he picks his way through the carnage – and here we find one of Zweig’s main themes underscored – Kroysing, too, eventually dies a senseless and arbitrary, albeit defiant, death in a French bombing raid.

It is important for the perspective on the war that Zweig establishes that most of the action he depicts takes place behind the lines. Unlike Remarque in All Quiet on the Western Front, Zweig does not confine his narrative to the emotional parameters of the frontline fighter. In their attitudes and underlying demeanour, the soldiers he portrays are civilians in uniform: the war has simply given them different opportunities for pursing their personal interests and ambitions. The war that Bertin experiences in his own battalion is the bureaucrat’s war; the war that is being fought is an industrialised war, with all that that entails for the scale of production, supply and deployment – and for the indifference of this war to the fate of human individuals. Bertin only once experiences the atmosphere of the front line, at Kroysing’s invitation, on a night when the Germans are preparing to attack. It brings him a moment of exhilaration as he watches massive artillery bombardments light up the night sky; and it brings him a moment of profound disillusionment when he enters a dugout and realises that the infantrymen with their drawn and anxious faces, who are about to go over the top, are merely obeying orders – just like everyone involved in the banal routine that has become his own daily life.

Present-day readers will find the 1936 translation of Education Before Verdun by Eric Sutton dated, occasionally stilted, and often over-literal. Above all, it fails to capture Zweig’s distinctive blend of colloquialisms with elevated narrative style and the socio-cultural allusions that give the text its sardonic edge. With the 100th anniversary of the Great War fast approaching, Arnold Zweig’s contribution to its commemoration and analysis is ripe for rediscovery.

Arnold Zweig (1887–1968) was born in Groß-Glogau (Silesia), the son of a Jewish upholsterer. He first gained acclaim for Claudia (1912). A reinforcement soldier in Serbia and Verdun, from 1917 onwards he worked as a writer and censor in the press division of the staff of the Supreme Commander of All German Forces in the East. In addition to novelistic and dramatic writings, he also produced essays and lectures on Judaism, anti- Semitism, and the teachings of Sigmund Freud. From 1933 to 1948 he lived in exile in Palestine before returning to (East) Berlin in October 1948. He was president of the Academy of Art until 1953, as well as of the the German PEN Center. He was awarded many prizes during his lifetime, including the USSR’s Lenin Peace Prize for his anti-war novels.

Previous works:
Zweig’s most important previous works include Claudia, Young Woman of 1914, De Vriendt Goes Home, The Face of East European Jewry, The Case of Seargent Grischa, Crowning of a King, and The Axe of Wandsbek.

David Midgley wrote his doctoral thesis at Oxford University on the life and works of Arnold Zweig. He is now a lecturer in the German Department at Cambridge University and a Fellow of St John’s College. He has published extensively on German literature and thought since 1890, including Arnold Zweig. Eine Einführung in Leben und Werk, Athenäum Verlag 1980, and Writing Weimar, OUP 2000.