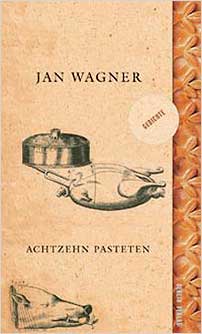 The (to British readers) slightly twee title of this refreshing collection of poems is taken from none other than the diarist Samuel Pepys, recalling eighteen vol-auxvents adorning a friend’s table to represent his eighteen years of marriage. But the work also draws on Carl Friedrich von Rumohr’s The Essence of Cookery, where the nineteenth-century gastronome declares that vol-aux-vents ‘can be used by a cook to show off his dual qualities of imagination and judgement’. Jan Wagner thus establishes the symbolic function of his culinary conceit at the outset, devoting each of the poems in their group to a different pastry. The theme is continued later on, in poems on lettuce, tomatoes, and even tea-bags. And there are also nature themes – horses, seagulls, eels, and so on.

Wagner is a formal poet, favouring classical linear patterns and traditional forms, but, as with some of his predecessors, the depths are often hidden. Placing poetry from abroad was once a hard task in Britain, but the recent emergence of a number of small publishers here able to produce books on very modest print runs has reversed this situation. Surely good news for a poet like Wagner, whose best imagery and ideas sparkle even as they conform.

Jan Wagner was born in Hamburg in 1971. He studied English language and literature in Hamburg, Berlin and Trinity College, Dublin, and was editor of a journal of international poetry until 2003. He nows lives in Berlin as a poet, translator and literary critic. Among the prizes his poetry has won are the highlyregarded Anna Seghers Prize and the Ernst Meister Prize.