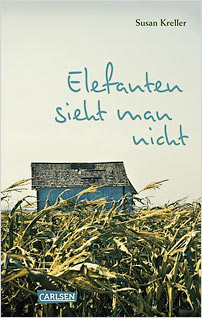 This disturbing debut novel addresses domestic violence against children and the silence of neighbours who look the other way.

Mascha is sent to live with her grandparents for the summer. Bored and lonely, she spends her days at the playground watching the children. There she meets a nine-year-old and her younger brother. Both children are very withdrawn, and Mascha comes to suspect that the children are victims of domestic violence. In her desperation she takes them to a little blue hut in the middle of a barley field, telling them that their father has asked Mascha to take care of them for a few days. When the children are finally discovered, Mascha is regarded as a wicked child who kept the children prisoner for fun.

The story is well-executed and atmospheric – images like the little blue hut in the yellow field leave a lasting impression. Just like Mascha, the tone is sometimes quiet and matter-of-fact, and at other times angry. Her motive is right, but the way she goes about helping the children is all wrong. The teenager, however, has a strong moral compass and a sense of responsibility that the villagers lack – raw qualities which ultimately do rescue the children.

Susan Kreller was born in 1977 and is a journalist and writer, whose favourite word is bromberry hedge. Elefanten sieht man nicht is her first novel.

Carlsen Verlag was founded in 1953. After the success of the PETZI series in German daily papers Forlaget Carlsen/ Denmark was prompted to establish a German subsidiary, trading under the name of Carlsen Verlag. The Pixi booklets, launched in 1954, proved to be a hugely successful venture. Since then Carlsen has published more than 1,300 titles with a total print-run of more than 250 million copies.