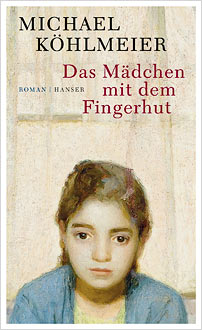 Part dark fairy tale, part mystery, Girl with Thimble is a page-turner about homeless street children on the run, told largely from a young child’s perspective.

Six-year-old Yiza is a migrant who has newly arrived in Germany. One evening Yiza’s ‘uncle’ doesn’t turn up to collect her from the market where she usually spends her days. She wanders the city streets until she is taken to a shelter for migrant children. There she meets two boys, Schamhan and Arian, who invite her to escape with them. Schamhan gives her a thimble – a precious token or talisman whose significance is never revealed. After trekking through snowy forests and housing settlements, stealing food to survive, they break into a house and replenish their supplies. The novel follows the children’s attempts to evade police custody as they subsist on the margins of society, forced to do whatever it takes to survive.

Both boys are touchingly protective of Yiza – but blind to moral or emotional complexities, unable to manage conflicting demands for empathy and understanding. When Yiza falls ill with a fever and hacking cough they find shelter in an old greenhouse in the garden of a big house and Arian goes off each day to find food and aspirin, begging on the U-Bahn to get what they need. One day he returns to the greenhouse and finds Yiza cradled in the arms of the old lady who lives in the villa. He runs away, and she takes care of Yiza, watching over her recovery. She – Renate – then attempts to teach Yiza some simple German. She seems caring, but possessive, and keeps Yiza under lock and key. One day Yiza sees Arian outside the house, and escapes from the kitchen by snatching the key from Renate, whom she then locks in. The children go back into the house and Arian brutally attacks Renate, hitting her repeatedly and leaving her for dead. The pair stock up on supplies, and take to the streets again, facing an uncertain future.

Girl with Thimble is narrated in simple language that reflects the slow-burn, linear thought processes of children. There is an innocent charm to this which belies the social reality in which the book is grounded: it unsparingly chronicles the harsh and brutal life of street children, homeless and dispossessed, surviving through guile, nerve, occasional brutality, and long-suffering endurance – and an instinctive affection and compassion for their fellow sufferers. This is truly a story for our times.

Michael Köhlmeier was born in 1949 in Hard am Bodensee, and divides his time between Hohenems in Vorarlberg and Vienna. Hanser publications include the poetry volume Der Liebhaber bald nach dem Frühstück (Edition Lyrik Kabinett 2012), the novels Abendland (2007) and Madalyn (2010), and most recently Die Abenteuer des Joel Spazierer (2013) and Zwei Herren am Strand (2014).