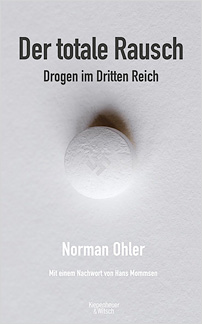 High Hitler sheds new light on the fascinating story of Hitler’s drug use and declining health. The author also documents the rise of the German pharmaceutical industry and examines drug use amongst the wartime population and in particular the German army. Ohler is first and foremost a novelist, and his gripping account reads like a thriller, revealing how the Führer and some of his closest allies became increasingly dependent on – and controlled by – drugs, as the war and the whole of Hitler’s world spiralled out of control. Ohler also analyses the relationship between Hitler and his personal doctor, Theodor Morell, who kept extensive notes about the drugs and ‘vitamins’ he administered to his patient. It is clear from these notes, and from Ohler’s meticulous interpretation of them, that from 1941 onwards Hitler relied regularly on a mixture of hormones, steroids and Pervitin (the precursor of today’s ‘crystal meth’).

Ohler eschews the simplistic judgement that Hitler’s addiction to drugs clouded his perspective, instead arguing that the drugs were what kept the dictator going for so long. On his account, the chemical cocktail in Hitler’s bloodstream fuelled his quintessential and often contradictory character traits: his emotional detachment, cold-bloodedness, euphoria, hubris, impulsive decisionmaking and his transgressive and excessive tendencies. Ohler does not suggest that the drugs are an excuse for Hitler’s behaviour, but makes a convincing case that they are deserving of greater attention than they have hitherto received, particularly in relation to the years after 1941. He shows how drugs were a natural extension of the way in which Hitler generated a sense of mass euphoria and intoxication at the major Nazi rallies. Of course Hitler’s drug use (and that of the Wehrmacht soldiers) also exposes the inner contradictions of the Nazi ideology, which put such an emphasis on health, fitness and clean living. It is chilling to learn that many of Hitler’s key decisions were made when he was ‘on drugs’, as corroborated by his doctor’s notes.

A must-read for all those interested in the period, this engrossing book is sure to succeed in the English-language non-fiction market. It works well as a companion to the major Hitler biographies, but can also be read as a stand-alone work that tells Hitler’s story from an intriguing and less familiar perspective.

Norman Ohler was born in 1970 and has worked as an author since 1993. He attended the Hamburg School of Journalism and studied cultural science and philosophy. His first book, Die Quotenmaschine, was published in 1995, and was the first novel to appear on the Internet. Other novels include Mitte and Stadt des Goldes. Ohler was writer-inresidence in Ramallah, has written film scripts (with Wim Wenders and Dennis Hopper, among others) and has received numerous awards and scholarships. His latest book, High Hitler, is his first work of non-fiction, for which he spent five years researching in archives in Germany and the USA.