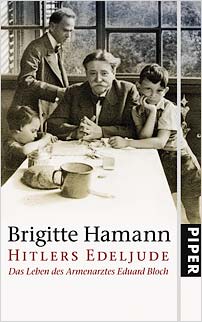 This is an extraordinary story in every way. The Blochs were a Jewish family of Czechoslovakian origin with a strong medical tradition, and Eduard, born in 1872, combined with his vocation as a doctor a particular sensitivity to other people’s suffering. It was this sensitivity that came crucially into play when Klara Hitler, the future Nazi leader’s mother, fell ill with cancer and was tended by Bloch until her death in 1907. Such was the young Adolf’s sense of gratitude for these efforts that years later, when the Nazi party achieved power, Bloch came to be recognised as Hitler’s ‘Edeljude’, or ‘Noble Jew’. This was a term used by many antisemites anxious to protect their special Jewish friends. But Hitler’s personal bestowal of the term was in a different class. He is even alleged to have said that ‘if there were more Jews like him (Bloch), then antisemitism would not exist’.

No more personal meetings are recorded between doctor and future dictator after Klara Hitler’s death, but the Bloch family were granted many exemptions from the anti-Jewish laws and were permitted to remain unmolested in Linz. Symbolic of the relationship between the two men are a couple of postcards reiterating his gratitude which Hitler afterwards sent to Bloch and which, alarmingly, the Gestapo later seized, in an attempt to cover up that aspect of their Fuhrer’s past.

Eduard’s memoirs, which he wrote in old age in New York, and on which Brigitte Hamann has based this fascinating book, leave no doubt about the young Hitler’s utter desolation at his mother’s suffering and death. So how could anyone capable of such natural and human feelings go on to unleash such evil and inhuman acts? Bloch never managed to resolve this contradiction. He himself had torn feelings – between hatred of the Nazis and compassion for a once vulnerable and unhappy young man. Of course, he had the safety of his own family to consider. All of them, parents and children, emigrated late in the war, at a point when it would have been difficult if not impossible for other Jews to do so. But that is not really the point. Readers must judge Bloch’s motives for themselves, and in this meticulously researched book, full of insights into Hitler’s early years and complete with appropriate family photographs, they will find themselves in an excellent position to do so.

Brigitte Hamann, has achieved international recognition through her many books on the history of Austria. Born in Essen in 1940 she studied German and History in Münster and Vienna. In 1964 she became an editor with the Neue Rhein Ruhr Zeitung and in 1965 she married the Viennese historian Günther Hamann and took on dual Austrian and German citizenship. Through close academic collaboration with her husband she gradually embarked upon her own path with the aim of bringing books on historical subjects that were both well-researched and accessible to a wider public. She has received a plethora of prizes.

Piper Verlag was founded by Reinhard Piper in 1904. The firm published many leading contemporary authors, a tradition followed by the founder’s son and grandson. After 1945 the programme expanded to include philosophy and non-fiction. Piper Verlag now includes the imprints Malik, Nordiska and Piper Fantasy, and has been part of the Swedish group Bonnier since 1995. Authors include Ingeborg Bachmann, Hape Kerkeling, Annette Pehnt, Gaby Hauptmann, Jakob Hein, Claudia Schreiber and Robert Löhr.