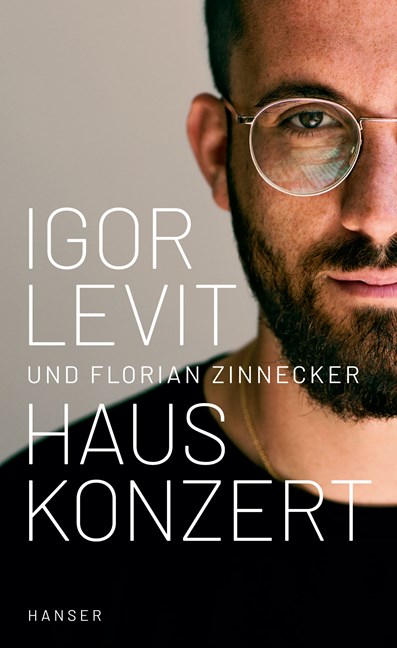 Prize-winning classical musician Igor Levit relocated his piano recitals to his living room during the Covid-19 pandemic and has gained huge global audiences for his livestreamed performances. Home Concert tells the story of his music career and political activism.

Co-written with journalist Florian Zinnecker, Home Concert follows a year in the life of Igor Levit as he switches from live concert performances to playing online. The book explores Levit’s vocal opposition to German right-wing attitudes to immigration, anti-Semitism and online hate crime, drawing on his own experiences as the child of a Russian Jewish family who moved from Gorki to Germany when he was eight years-old.

Levit has actively engaged in the issue of migration from Syria and elsewhere to Germany since 2015, visiting refugee camps in Greece. He is famously quoted as saying that art is free but must also be political. Levit is a frequent guest on German TV talk shows where he is openly critical of the nationalist Alternative für Deutschland political party. The book reveals that, like many other prominent figures in Germany, he has received death threats for the views he expresses.

Home Concert has a broadly chronological, diary-style structure covering the period from late 2019 to the end of 2020. It describes Igor Levit’s busy schedule of concert performances until these were interrupted by the March 2020 coronavirus lockdown and replaced by Igor’s famous home concerts, livestreamed from his living room. The narrative is interspersed with accounts of earlier events in Igor’s life, principally those that influenced his decision to become politically active as an artist. Individual pieces of music are also described in more detail.

Levit’s international appeal is reflected in the widespread coverage of his lockdown concerts by the English-language media. The UK weekly newspaper The Observer chose his online recitals as number one in its top ten classical picks for 2020. Home Concert reflects on the migration of cultural events online during the pandemic and illuminates the significance of these shared experiences in alleviating people’s sense of isolation during lockdown. Accessible and journalistic in style, Levit and Zinnecker’s book is an easy and enjoyable read, showcasing the achievements of a talented and charismatic classical musical star and focusing on highly topical issues, including the Covid-19 pandemic, immigration, racism and far-right politics.

Igor Levit, born in 1987 in Gorky, Russia (now Nizhny Novgorod), moved to Germany with his family when he was eight years old. He studied at the Hannover Academy of Music and was the youngest participant in the Arthur Rubinstein Competition in 2005, winning the Silver Prize. More recently he has released recordings of all 32 Beethoven piano sonatas. Levit is the recipient of the Gilmore Artist Award and the Gift of Remembrance from the International Auschwitz Committee.

Florian Zinnecker, born in Bayreuth in 1984, is the deputy desk manager of the weekly newspaper DIE ZEIT. After studying cultural studies and politics, he wrote for the Süddeutsche Zeitung Magazin and attended the Henri Nannen School of Journalism. He was awarded the Konrad Adenauer Prize for his coverage of the Bayreuth Festival.