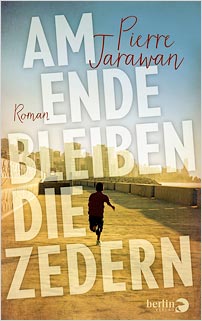 In the End, the Cedars Remain is the enthralling story of an exiled family in Germany, torn apart by a secret whose origins lie in the Lebanese civil war. Pierre Jarawan’s wise and informative debut makes for topical reading in the light of the current refugee crisis and international tensions across Europe and the Middle East.

Samir’s idolised father Brahim mysteriously disappears when he is a young boy, shattering his world and later compelling him to travel to Lebanon to uncover his father’s secret. When Samir’s mother dies of a stroke he could have prevented, he enters a deep depression whose only outlet is a mawkish obsession with Lebanese politics. It is Yasmin, his childhood sweetheart and only confidante, who saves him from himself by refusing to marry him until he lays his father’s memory to rest. As Samir pursues his investigations in Beirut, the clues gradually fall into place – each new informant turns out to be a character from his father’s bedtime stories and each entry in his father’s diary takes him a step closer to finding Brahim.

The final pieces of the puzzle fall into place after Samir is the victim of a knife attack in which he is mistaken for somebody called Youssef, a student who is compiling the first non-partisan history of the civil war to try and foster mutual understanding between the various communities. Deep in the Lebanese mountains, Samir is reunited with his father and discovers that Youssef is the half-brother he never knew he had.

In the End, the Cedars Remain is a rich and skilful account of the devastating effects of a family secret and a son’s quest to untangle a toxic legacy of nostalgia, guilt and secrecy. Jarawan punctuates the account of Samir’s attempt to uncover his father’s past and his present whereabouts with episodes of extravagant storytelling in the Oriental tradition and with extracts from his father’s diary. The vivid portrayal of Beirut, riven with factional fighting and enduring recriminations, offers insights into the knotty causes and effects of the conflict. Jarawan is sensitive to the complexities of both conflict and exile, and therefore to his character’s ambiguous motives and allegiances. His masterful debut successfully interweaves historical events and a suspense-filled investigation of one family’s fate into a novel that moves its readers while also providing a finer appreciation of Lebanon’s woes and resilience.

Pierre Jarawan was born in 1985 in Amman (Jordan) and is a writer and successful poetry slammer. He migrated to Germany with his family at the age of three. Inspired by his father’s love of telling imaginative bed time stories, he wrote his first poem at the age of thirteen. In 2015 he received the City of Munich literary scholarship for an extract of his debut novel In the End, The Cedars Remain. He lives in Munich.

Berlin Verlag was founded in 1994 as an independent publishing house and publishes approximately forty titles per year. The list combines international and German literary fiction and a non-fiction programmes. Several young German authors have made successful publishing debuts with Berlin Verlag, and many authors are internationally renowned prize-winners. Since 2012, Berlin Verlag has been part of the Bonnier Group.