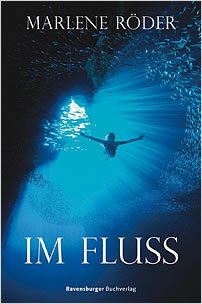 The intertwined lives of three teenagers are the subject of this intricate and skilfully written tale. Mia is a city girl whose parents decide to move to the country when her father gets a new job. Attached to her friends, she is furious at the prospect except for one consideration: she will never again have to set eyes on Niklas, her ex-boyfriend who, it emerges later in the story, raped her and then dumped her. From the very first day in her new home, however, Mia is intrigued by the neighbours, whose house and garden she can see clearly from her window, and, reluctantly at first, she gets to know them – the grandma, the father, and the two teenage boys, Alex and Jan. Alex is the older of the two, and is friendly and confident. Jan is dreamy and loves to be down by the river. Jan and Alex’s mother disappeared when they were small, and every year, on his birthday, Alex receives photos of far-away places which are supposedly from her, and which he sticks all over the walls of his room. Jan shows no such longing for his mother, but has a special friend called Alina, who lives in the river and fiercely demands his loyalty.

As spring turns into summer, Mia starts going out with Alex, yet keeping a careful emotional and physical distance from him so as not to be hurt again. She develops a friendship with Jan based around music, allowing him to listen to her cello-playing and eventually persuading him to row her across to the island in the middle of the river where he sings his own strange music to her. During the summer and autumn, Mia learns more and more about Jan and Alex’s mother’s story from their grandma, but as winter approaches mysteries are deepening and relationships turning sour.

The originality of this book lies both in its structure and in its content. The mystery element – and the identity of Alina – is unravelled at just the right pace, and the chill that the final moment of revelation sends down the reader’s spine is very real. Perceptive, eery, warming, poignant – this new writer, just twenty-four years old, is a real find and this novel has strong appeal.

Marlene Röder, born in 1984, stands out for her exceptional narrative talent. Im Fluss, her first novel, has already been awarded the Hans-im-Glück prize from the city of Limburg, and she is working on her second.

Ravensburger Buchverlag In 1883 Otto Maier founded the Ravensburger Buchverlag. He was impressed by the new educational ideas of his time and tried to implement them in his books and games. His aim to produce only the best is still the dictum of the firm which survived the two World Wars and has grown into an international company. Its output is divided into book publishing and games, with over 1,400 employees in total. It is considered one of Germany’s leading publishing houses and this year sees its 125th anniversary.