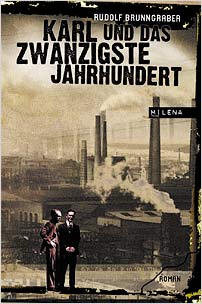 The Viennese novelist Rudolf Brunngraber (1901-60) is today a relatively obscure name, even to many admirers of Austrian literature, yet between the 1930s and 1950s he was an extremely popular author, known for his socially critical novels about scientific and economic subjects that are rarely the subject of literary fiction. The history of the element radium, the development of radio broadcasting, and the global trade in heroin provide the focus for three of his best known novels, for example. Whilst these later works of fiction, which he referred to as ‘Tatsachenromane’ (fact novels), are bold and interesting, it is his debut novel, published in 1933, that is Brunngraber’s true ‘masterpiece’, as Claudio Magris puts it in his (also magisterial) Danube. The remarkable, innovative and self-consciously ‘epochal’ novel, Karl und das zwanzigste Jahrhundert (Karl and the Twentieth Century) made his name, and for a time Brunngraber was one of the few Austrian authors thought to be able to capture the Zeitgeist in the way that, internationally, groundbreaking novelists such as Alfred Döblin or John Dos Passos had done. It is today undeservedly forgotten both in the German-speaking world and internationally.

A product of and response to the global Great Depression of the early 1930s, the novel presents the life story of Karl Lakner, who is born at the end of the nineteenth century in working-class Vienna, and whose life is largely shaped by political, industrial and above all economic powers that remain entirely beyond his control. The novel, a story of a ‘little man’ comparable with the figures typical of contemporaries such as Hans Fallada, is at one level an example of literary ‘Neue Sachlichkeit’ (New Objectivity), a trend that is more usually associated with Weimar Berlin than Vienna. It is a novel of contemporary life concerned to ground its narrative not only, naturalistically, in ‘real life’, but in demonstrable, statistically provable reality. Brunngraber thus embeds the life story of his unfortunate protagonist in a montage, or perhaps more accurately a network of interconnected statistics, data, and information relating to global events far beyond what seems immediately relevant to the story at hand. In doing so, he puts into practice lessons learnt under one of the most extraordinary contributors to intellectual life in Vienna in the interwar period. Otto Neurath (1882-1945), a polymath philosopher and theorist, developed an innovative approach to education and learning – his so-called Viennese Method – that employed, above all, statistical methods. This socially motivated project was realised via his Gesellschafts- und Wirtschaftsmuseum (Social and Economic Museum), aimed at the working classes, in which statistical analysis of aspects of everyday life was brought to life in vivid pictorial form, a product of the collaboration with the German socialist artist Gerd Arntz (1900-88). These ‘isotypes’ have had a lasting influence.

Brunngraber’s challenge was to translate this pictorial method into narrative form, and the resulting ‘Tatsachenroman’ is original, effective, and even moving. The reason has a lot to do with the context in which the novel was written and the society that Brunngraber was seeking to depict. Far from understanding Vienna as a self-contained world, he sees it primarily as an urban, industrial environment dependent entirely upon global networks, relationships, trends, and influences. As such, the impact of the global economic crisis of the early 1930s was keenly felt in Vienna; in his protagonist Karl, and in the mass of data in which his story is enveloped, Brunngraber attempted to present an illustration of what he saw as our collective helplessness, of the way in which individual lives, whether it was understood or not, were often shaped and steered by forces beyond our control, and by chains of cause and effect that can be traced back many years before our birth.

Today, as we live through a period of renewed financial and economic crisis on a global scale, in which the ‘networked’ and contingent nature of reality is as apparent as it is hard to grasp, Karl und das zwanzigste Jahrhundert stands out as a significant Modernist text of the early twentieth century that is ripe for rediscovery and reappraisal.

Rudolf Brunngraber (1901–1960) was an Austrian novelist and journalist whose novels have been translated into eighteen languages. The son of a mason, Brunngraber grew up in a workingclass district of Vienna. He trained as a teacher and studied at the Academy of Applied Arts in Vienna before working as an industrial designer and in a series of other jobs. A social democrat with a profound interest in social statistics, between 1928 and 1934 Brunngaber worked at Otto Neurath’s Social and Economic Museum. Brunngraber’s first novel, Karl und das zwanzigste Jahrhundert, was heavily influenced by Neurath’s statistical work. In 1933 Brunngraber was elected as chairman of the newly founded Austrian Association of Socialist Writers. Brunngraber’s reputation is stained somewhat by his willingness in 1938 to become a member of the Reichsschrifttumkammer (Reich Chamber of Literature) after Austria’s annexation by the Nazis. His 1941 novel Zucker aus Kuba, published by Rowohlt, became a bestseller. After the war, however, Brunngraber returned to social-democratic politics in Austria, and continued to produce ‘fact’-based novels with a sociological character, marked by an increasing cultural pessimism and anti-technological scepticism.


Jon Hughes is Senior Lecturer in German and Head of the School of Modern Languages, Literatures and Cultures at Royal Holloway, University of London. He has published widely on German and Austrian literature of the early twentieth century, particularly on the work of Joseph Roth.