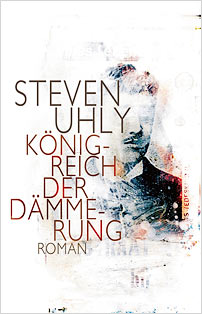 Steven Uhly’s literary but highly readable saga follows the quest for identity and home in a traumatised post-war world.

Kingdom of Twilight begins towards the end of the Second World War when an SS officer is shot dead by a young Polish Jew, Margarita Ejzenstain. In retaliation, the officer’s commander orders that thirty-seven Poles be shot – one for every year of the dead officer’s life. The impact of this event spreads through the novel as it alters the lives of countless others. Margarita is hidden by a German couple, the Kramers, but dies as she flees the oncoming Soviet army with her new-born baby, Lisa. Frau Kramer saves Lisa and brings her up as her own granddaughter.

After the war, Frau Kramer and Lisa meet German Jew Ana – who was kept as a virtual slave by mass-murdering SS officer Josef Ranzner – in a Displaced Persons camp, but they lose touch with her when she marries and emigrates to Israel. Later, in an attempt to learn more about her Jewish roots, Lisa travels to Israel and falls in love with Ana’s son Shimon. Ultimately, Shimon gets clean and comes to Germany to be with Lisa and their son, agreeing to help her research her birth family.

These stories are intertwined throughout the novel, and intermingled with those of Ranzner, their future families and various groups of Displaced Persons – Poles, Germans and Jews alike – after the end of the war. It deals with Jewish refugee organisations trying to smuggle DPs into Palestine despite the British blockade, the creation of the state of Israel, the development of Mossad, as well as the West German secret service. It also demonstrates that attempts to find a homeland for Jewish refugees resulted in further injustice, since it instead displaced the Palestinians, sowing the seeds of war and conflict that continue into our times.

The reader sees events from multiple perspectives, including an atrocity the SS officer witnesses before he is shot, and then his perception of his own death. There is also a slowmotion account of his shooting and an artfully detailed description of the Polish townscape; the writing is lyrical, with its long hypnotic sentences at times breaking into poetry.

Kingdom of Twilight is a saga with complex family histories and historical background, and deals with a multifaceted and fascinating aspect of twentieth-century history that has modern-day repercussions.

Steven Uhly was born in 1964 in Cologne and is of German-Bengali descent, thereby partially rooted in Spanish culture. He has studied literature, served as the head of an institute in Brazil, and translated poetry and prose from Spanish, Portuguese, and English. He lives in Munich with his family. His book Adams Fuge was granted the “Tucan Price” of the city of Munich in 2011. His novel Glückskind (2012) was filmed as a primetime production by director Michael Verhoeven for ARTE and the 1st German Channel ARD. It will be screened as the opening movie of the new Potsdam International Filmfestival in October and broadcast on TV in November. A theatre production based on the novel will be presented in Rostock in November.

Secession Verlag für Literatur was founded in Zurich in 2009 as a publishing house for contemporary literature and new editions of hidden gems in German and in translation. It was voted the “Newcomer of the Year” in 2011 in Switzerland. Novels have been published by authors Steven Uhly, Hélène Bessette, Esther Dischereit, Jérôme Ferrari, Lars Gustafsson, Magda Szabó, Christian Uetz and others. The company is run by Christian Ruzicska (former Tropen Verlag) and Joachim von Zepelin (former correspondent at Financial Times Deutschland).