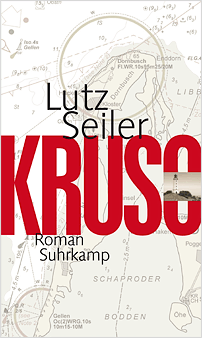 Kruso is the first novel by Lutz Seiler, one of Germany’s greatest living poets and a highly respected literary figure.

It is 1989, and a young literature student named Ed is fleeing from the unspeakable tragedy of his girlfriend’s death in an accident. Ed needs to leave his old life in provincial East Germany behind, and so he travels to the Baltic island of Hiddensee. Long shrouded in myth, the island is a well known destination for hippies, idealists and those at odds with the East German state.

Without any concrete plans upon reaching the island, Ed goes from town to town searching for seasonal work and shelter. Eventually he stumbles upon the Klausner, the island’s most popular restaurant, and ends up washing dishes there. Although he is keen to remain on the sidelines, Ed feels drawn towards Kruso, the unofficial leader of the seasonal workers.

It emerges that Kruso, a charismatic but cryptic character, is on a mission to help the countless runaways who come to the island trying to make it to the West, but is also on an ideological quest to unite them all in the pursuit of perfect freedom. Reluctantly, Ed becomes involved in the rituals of free love that the workers practise, and craves Kruso’s acceptance and affection. There are direct and indirect references to Robinson Crusoe and Friday, painting a complex picture of their friendship, which is closer to love in its intensity. As the authorities begin to close in on Kruso, and East Germany’s borders become porous, the friends’ grip on reality loosens and life on the island changes irrevocably.

Seiler has written a novel of extraordinary beauty, combining lyrical intensity with a genuinely involving story. This vigour extends beyond the climactic dénouement to the epilogue, where the narrative shifts to the first person. ‘Edgar’s Report’ is an account of his attempts to locate the body of Kruso’s sister – missing, supposed washed up on the shores of Denmark as she attempted to flee East Germany. Here, fiction brushes up against fact as both narrator and author bear witness to those who lost their lives trying to swim to freedom, and to the tragedy of their anonymity in death. Kruso is unique in combining this little-known episode of recent history with the powerful story of a tormented young man, told with a poet’s sensibility, and with moments of humour and suspense that make it an unforgettable read.

Seiler has been awarded the Uwe Johnson Prize 2014 for Kruso. The prize honours authors ‘whose writings reflect the German past, present and future beyond the surface of “simple truths”.’

Lutz Seiler was born in 1963 in Gera, Thuringia, and today lives in Wilhelmshorst near Berlin and in Stockholm. He initially trained as a construction worker and worked as a carpenter and mason. He completed his studies in German language and literature in 1990 and has been the literary director of the Peter Huchel Museum since 1997. Seiler was writer in residence at the Villa Aurora in Los Angeles and was awarded a fellowship at the German Academy in Rome. His many prizes include the Ingeborg Bachmann Prize, the Bremen Prize for Literature, the Fontane Prize, and the Uwe Johnson Prize.