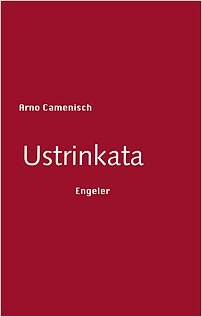 Camenisch, a superb performer of his own work, uses the characteristics of oral speech and storytelling to great effect. His prose, always rhythmic, is often poetic. The focus on ‘voice’ and different forms of English in recent British and American fiction means that readers will quickly recognise and relish what this rising literary star is all about.

Last Last Orders is the third part of an award-winning trilogy set in the Swiss Alps. It is the final evening in the Helvetia bar, and the regulars sit around one last time to drink and talk before the bar closes for ever. Characters familiar from book two of the trilogy – villagers past and present, dead and alive – gather at the table as tales from the world they inhabit, both tragic and hilarious, are shared and relished. Everything’s coming to an end but as long as someone is still speaking, the last glass will not empty… A quite brilliant scenario – and Camenisch, a master storyteller, can be relied on to make similarly brilliant use of it.

Sez Ner, the first novel in the trilogy, is set during a single summer. The four main (unnamed) characters are the dairyman, his farmhand, the cowherd and the swineherd. Camenisch focuses on these four who live and work in close proximity – but also introduces a host of memorable minor characters. Equally striking are the wind and the weather and the cows, pigs, cats and dogs that inhabit this tale. Part two, Behind the Station, is written from the perspective of two young brothers growing up in a small village in a valley flanked by high mountains.

Camenisch uses ‘miniatures’ (c.f. flash fiction) to tell his stories: often touching, often hilarious, often harrowing – always immediate. Life is frequently as harsh as the surrounding landscape – it is a life marked by hard graft, at times dangerous work, as well as by solitude, cruelty, alcoholism and sheer bloodymindedness – but the author’s handling of situations and everyday lives is characterised at all times by affection, humour and a great ear for the sounds of the setting.

Already established as one to watch on the international literary stage, Camenisch has read to audiences in many countries. Such is the power of his readings, he is often immediately invited back to the country in question. This young author would be a sound investment for any publisher of literary fiction.

Arno Camenisch was born in 1978 in the Graubünden region of Switzerland. He studied at the Swiss Literature Insitute in Biel, where he now lives. Camenisch has won multiple prizes for his poetry, prose and drama, which he writes in both German and Romansch. He is a member of the Spoken Word ensemble ‘Bern ist überall’. Extracts of his prose texts have been translated into fifteen languages, including English, and published in Best European Fiction 2012 (Dalkey) and Harper’s magazine.