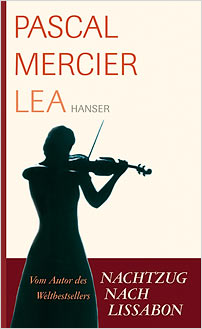 After just a few pages it becomes clear that this story will end badly. In part it is an account of the descent of a young woman, the Lea of the title, into madness and eventual suicide. It is also about the inability of her father, Martijn van Vliet, to do anything to save her. Indeed, his embezzlement of university research funds to buy his daughter an extortionately expensive violin causes his own tragedy as well as hers.

This longish novella raises questions about the extent to which we are able to be authors of our own fortune. Chance plays a large role in the events the story describes, but the book does also concede the possibility of some degree of choice when it comes to how we actually react to chance events. It also thematizes the subject of alienation, the difficulty of really connecting to those we should be closest to.

Lea is a fluent and well-constructed book with a multi-cultural background and many interesting ideas and influences. An absorbing, thoughtful read.

Pascal Mercier was born in Bern, Switzerland, in 1944. He studied philosophy in London and Heidelberg and is now a Professor of Philosophy at the Free University of Berlin. His previous novel, Nachtzug nach Lissabon (Night Train to Lisbon), one of the biggest sellers in recent years is translated into nineteen languages. He also writes philosophical texts, which are published under his real name, Peter Bieri.

Carl Hanser Verlag was established by its eponymous owner in 1928 in Munich. Its founder’s interests in both literature and science have been maintained to the present day. The firm publishes fiction and nonfiction for both adults and children. Its authors include Italo Calvino, Umberto Eco, Jostein Gaarder, Lars Gustafsson, Milan Kundera, Harry Mulisch, Philip Roth, Susan Sontag, Botho Strauß, Raoul Schrott, Rafik Schami, Alfred Brendel, Elke Heidenreich and ten Nobel prize-winners, among them Elias Canetti, whose works have been translated into more than twenty different languages.