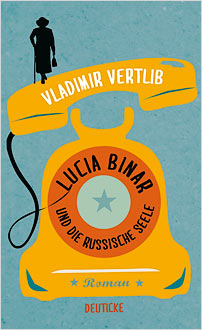 Lucia Binar and the Russian Soul is a gripping, darkly entertaining novel full of wit and wisdom – a work of world literature.

Lucia Binar is an eighty-three-year-old retired school teacher who has lived almost her entire life in an apartment building on ‘Great Moor Lane’ in Vienna. The century-old building is falling to pieces because its real-estate tycoon owner is planning to convert it into luxury apartments. But Lucia Binar is going nowhere. She couldn’t care less about the street’s supposedly offensive name – unlike her neighbour Moritz, a young political-science student who is gathering signatures for a petition to rename it. Moritz and Lucia become unlikely allies when he uses jujitsu to defend the old woman from a drunken squatter. He also offers his help when he learns that Lucia is intent on finding the call-centre employee who insulted her on the phone.

Elisabeth Klamm’s story is narrated in parallel: a tortured young mother who lost her husband in a traffic accident. Elisabeth works at a call centre until she meets Alexander, a young Russian immigrant trying to establish himself in Vienna. Then there’s the mysterious Viktor Viktorowitsch Vint, by his own account a ‘magician, facilitator of selfawareness, expert on the Russian soul, psychotherapist without a gun license, and charlatan of the highest order’. Alexander encounters Viktor while still in Russia, at his aunt’s funeral, and it is with Viktor’s help that he is able to come to Vienna. Everything comes together when Lucia and Moritz attend a séance conducted by Viktor Viktorowitsch and his new assistants, Alexander and Elisabeth.

The book begins in a comic vein as we watch the clever and level-headed Lucia Binar confront the absurdities of the modern world, including its harsh economic realities. Then darker undercurrents materialise as inexplicable things begin to happen. Vertlib portrays the bleakness and corruption of modern-day Russia, depicting Alexander’s former life in provincial Siberia as well as the more refined depravity of modern-day Vienna.

Vladimir Vertlib’s style is accessible and ironic with sparing but devastatingly accurate character descriptions. Vertlib is a well-established author whose work has been translated into Italian, French and Russian; Lucia Binar and the Russian Soul would be a perfect English-language debut.

An English-language review of Lucia Binar and the Russian Soul from Literaturhaus Wien is available here:

Vladimir Vertlib was born in Leningrad in 1966. In 1971 he emigrated to Israel with his family, and then relocated to Austria in 1981. He studied political economics and is now a full-time writer living in Salzburg.