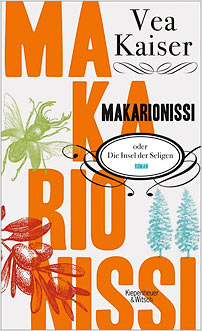 Vea Kaiser is a hugely talented young author who captivates readers with her sharp, witty writing.

This entertaining family saga spans almost sixty years, from 1956 to 2014. The novel begins and ends in Greece, with Greek history and tragedy always looming in the background. The novel revolves around two cousins, Lefti and Eleni, who are best friends from childhood. Their grandmother, a powerful matriarchal figure, is convinced that they should marry to preserve the family line in their dying mountain village. But Eleni is a stubborn child, and decides early on that she won’t be getting married at all. Eleni eventually winds up in prison for her outspoken leftist views, while the unpolitical Lefti finally marries her in a last-ditch effort to save her from a worse fate. The young couple leave the country and go to Germany, where they soon grow apart.

Full of anecdotes, stories and fairy-tales and suffused with human insight, the novel reminds us of the necessity of forgiveness and that, whether we want it or not, our families and their failings always catch up with us in the end.

Vea Kaiser was born in 1988 and studied Ancient Greek in Vienna. In 2013, her debut novel, Blasmusikpop, was named the best German-language debut at the International Festival du Premier Roman in Chambéry, and nominated for the Aspekte Literature Prize. She was a writer in residence at Bowling Green State University in the summer of 2014. That same year, she was named author of the year in Austria. Rights to her previous novel have been sold to the Czech Republic, France and the Netherlands.