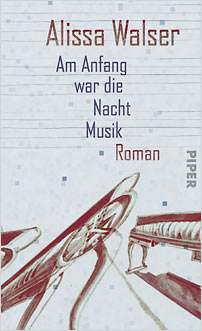 Readers will find themselves engrossed in this stylish and nuanced psychological portrait based on a unique episode in medical history. Maria Theresia Paradis is a musical phenomenon, blind since the age of three and yet a startlingly talented young pianist and singer, touring the courts of Europe as a ‘blind genius’. But this kudos is threatened when the celebrated Viennese doctor Franz Mesmer succeeds in improving her sight, and thus the stage is set for this moving story of misplaced ambition. The novel charts the breakdown of Mesmer’s and Maria Theresia’s relationship, where any incipient passion can find no outlet in the oppressive society or in the narrative, as well as the disintegration of Mesmer’s standing in Austro-Hungarian society, resulting in his retreat to Paris where he feels his talents will be more appreciated.

Walser envisions the doctor-patient relationship in terms of a proto-Freudian talking cure, with sexual undertones and an element of transference. Maria Theresia has been ill-treated by her previous physicians and wears an enormous wig to cover her bald and scarred head. But as her vision returns in Mesmer’s private household clinic, her musical abilities fade, and her domineering parents remove her from Mesmer’s care under allegations of impropriety which appear to be founded in jealousy and a fear of losing their daughter’s promising career. Maria Theresia’s sight duly worsens, but she is able to resume her performances. The narrative closes with Mesmer seeking out Maria Theresia at one of her concerts, a tantalisingly open ending which refuses to be explicit about the nature of their relationship, nor whether Maria Theresia has retained any vision at all. We also leave Mesmer just as he strives to establish himself in Paris, giving the reader no answers as to how his life and career will progress.

Walser’s novel is beautifully composed, and differentiates itself from the standard historical novel by moving beyond being simply plot-driven; for the music is not only in the characters’ shared passion for that medium, but also in the prose itself. The author has done meticulous research that results in wonderfully authentic descriptions of late 18th-century Vienna, and her talents as a visual artist are reflected in the vibrancy of the scenes that she portrays. The ending thwarts expectations of a thrilling finish, but the contemplation it provokes is hugely satisfying.

Alissa Walser was born in 1961 and is an author, translator and painter. She has previously published two volumes of short stories, and she was awarded the prestigious Ingeborg Bachmann Prize for her short story ‘Present’. Am Anfang war die Nacht Musik is her first novel.

Piper Verlag was founded by Reinhard Piper in 1904. The firm published many leading contemporary authors, a tradition followed by the founder’s son and grandson. After 1945 the programme expanded to include philosophy and non-fiction. Piper Verlag now includes the imprints Malik, Nordiska and Piper Fantasy, and has been part of the Swedish group Bonnier since 1995. Authors include Ingeborg Bachmann, Hape Kerkeling, Annette Pehnt, Gaby Hauptmann, Jakob Hein, Claudia Schreiber and Robert Löhr.