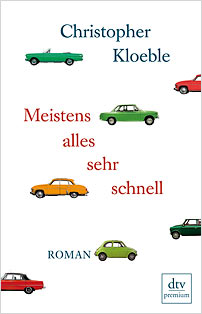 Mostly Everything Very Fast is a fresh and exciting novel with echoes of the work of Jonathan Safran Foer. Christopher Kloeble deftly handles the diverse strands of the plot, bringing them together in surprising and gratifying ways at the book’s conclusion.

Nineteen-year-old Albert grew up in a children’s home without ever knowing his mother. His father, Fred, is suffering from a heart condition and has just five months left to live. Albert decides to spend this time with him and travels to the village in rural Bavaria where his father lives, and where he is a local hero – having saved someone’s life during a dramatic traffic accident. Fred is mentally handicapped and he and Albert have a very tender relationship, if not exactly a typical father-son one. In fact, Albert has acted as a father to Fred for as long as he can remember. He cannot stop wondering who his mother is and, in the absence of any help from Fred in this matter, embarks on a quest to find her.

The novel moves fluently between the interconnecting stories of Fred and Albert and that of its first-person narrator, Julius. Now bed-ridden in a retirement home, Julius’s remarkable life story offers an oblique take on twentieth-century German history, marked alternately by great warmth, humour, nostalgia and – at subtle and shocking moments – horror. The novel’s odyssey through the distinctly awkward history of Albert’s family, which takes in incest, betrayal and murder, leads to startling discoveries about Albert’s parents. He finds out that Julius (and not Fred) is his father, and the nun under whose care he grew up is his mother. Despite this, Albert persists in regarding Fred as ‘his most precious possession’ and still resolves to spend the last months of Fred’s life with him.

Mostly Everything Very Fast confronts difficult topics with narrative ease and wit, without being diverted into cliché. Each of the extensive cast of characters is richly complex and believable: from Fred, whose obsession with green cars forms part of the matter-of-fact portrayal of his disability, to Albert’s mother, Sister Alfonsa, who has him tie shoelaces over and over again as a form of penitence. Kloeble’s extremely readable novel is true to its title in its treatment of a broad spectrum of human existence, combining moments of poetry with philosophical insights and humour.

Translation rights available from:
Deutscher Taschenbuch Verlag GmbH & Co. KG
Friedrichstr. 1a
80801 München, Germany
Tel: 0049 89 38 167-125
Email: chory.constanze@dtv.de
Contact: Constanze Chory
www.dtv.de/rights
Deutscher Taschenbuch Verlag is one of the most important publishers of paperbacks in the German language. Jointly founded in 1961 by a group of German hardcover publishers as their own paperback publishing house, dtv has also developed an important list of original titles, which now represents some thirty percent of its publications, the best known being the dtv-Atlases. Other quality paperback lists include contemporary fiction, the classics, human and natural sciences, reference books and dictionaries, self-help and a strong children’s and young adult list.