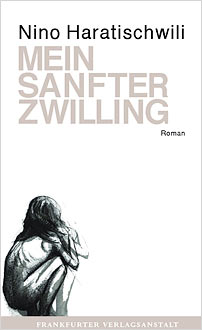 Haratischwili’s outstanding second novel was awarded the 2011 Hotlist prize, given annually to the best book from an independent German publishing house. My Gentle Twin is a captivating story of fraught relationships and anguished love in a complicated family. Stella is in her thirties, a working mother living in Hamburg with her dependable husband. Her comfortable existence is torn apart when her adopted brother Ivo (the ‘twin’ of the title) reappears unexpectedly after a long absence. Scenes of Stella’s present-day life and encounters with Ivo are masterfully interwoven with revelatory flashbacks to their traumatic childhood.

Ivo’s arrival in Stella’s family is ‘an ending with which everything began’. They had originally met because their parents were lovers. The two children used to play together downstairs at Ivo’s house while their parents made love upstairs. Everything changes when Ivo’s father finds out about his wife’s affair; and his violent response has fatal consequences. The two families are irreparably divided and yet, as each of their parents is taken away from them, Stella and Ivo become inseparable, and are sent to live with an aunt. For some time after his mother’s death Ivo is mute, and Stella even learns to speak for him. Their passionate and difficult relationship ends when Ivo, high on drugs, crashes his motorbike with Stella as a passenger. They both recover but do not see each other again until his return to Hamburg at the start of the novel, marking another simultaneous ending and new beginning for Stella.

In the second part of the novel, Stella leaves her husband and child to follow Ivo to Georgia where he is ostensibly researching a documentary, but is in fact trying to uncover the truth about another family’s past. The experiences of violence, betrayal and adoptive parenthood are familiar to Ivo, who hopes that he and Stella can exorcise their own painful family history by uncovering another’s secrets. But on his way back from a research trip, Ivo is killed in a car crash. Stella returns to Hamburg where she scatters his ashes on the lake they swam in as children. Facing divorce but armed with new insight, Stella focuses on her role as mother and finally makes peace with her lost loves.

My Gentle Twin is an absorbing and suspenseful emotional drama which confronts universal themes of forbidden desire and the inescapability of the past.

Nino Haratischwili was born in 1983 in Georgia and is a successful and award-winning novelist, playwright and director. Feeling at home in two worlds, each with their own language, she has been writing both in German and Georgian since the age of twelve. In 2010 her debut novel Juja was nominated for the German Book Prize and the ZDF-aspekte-Literature Award and was awarded the debut prize of the Buddenbrookhaus. Mein sanfter Zwilling was selected for the Hotlist of Independent Publishers 2011. Nino Haratischwili lives as a freelance director and author in Hamburg.

Haratischwili will be writer-in-residence at the 2012 Summer School of the British Centre for Literary Translation.
www.bclt.org.uk

Frankfurter Verlagsanstalt is an independent publishing house headed by Joachim Unseld. With a focus on new German fiction by young authors and some translated contemporary foreign fiction, it has secured an excellent reputation:
‘A solid reputation for literary pearls’ – Süddeutsche Zeitung
‘A clear profile in international and German fiction. Unseld personifies the kind of publisher that has become a rarity in his generation, one who combines a nose for literary discoveries with a savvy business sense. Here editing is still done by the boss.’ – Frankfurter Allgemeine Zeitung