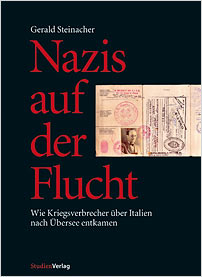 Steinacher is a young contemporary historian with leanings to military and secret service history, whose work makes him peculiarly well-placed to deal with the multiple complexities and ‘borderline areas’ of his subject. A vast amount of research has gone into this account but its main aims are simply stated: with Italy as the European end of the operations and Argentina as the destination, to make clear the various roles of the Red Cross, the Vatican, and the Secret Services in channelling Nazi war criminals from retribution in Europe to a new start in South America, sometimes with their families.

This is an exceedingly complex subject to write about. For instance, Steinacher makes clear that the people he is dealing with were not a distinct refugee group – intermingled with them were thousands of technically stateless or displaced persons who flooded across the Alps to Italy and thence to destinations abroad, and he explores a number of crucial factors which helped create conditions for this exodus. Other factors to be taken into account were the shortage of trained intelligence personnel, in consequence of which former Nazi agents could be turned around and used against Communism rather than prosecuted. As Steinacher insists, all the major countries in the post-war world had ‘mixed motives’ for their actions.

It is not hard to see how particular groups and individuals who actively sympathised with ex-Nazis could evolve a successful network; or how hiding places for loot and fugitives, safe houses and secret escape routes, could be almost impossible to smoke out. The book also shows not only that it is a complicated and erratic business to bring such criminals to trial, but exactly why, even with evidence. This insight, though pessimistic, is borne out by current issues over the capture of war criminals from the Bosnian conflict, to say nothing of issues raised by the Iraq war.

This is an important book, not only for the new material it contains, but even more perhaps for the care with which Steinacher focuses his long, medium and close-up perspectives. In this, he has done his difficult subject full justice.

Gerald Steinacher is a historian and archivist in the Südtirol Regional Archive in Bozen, the member of several historian committees in Germany and Italy and holds teaching positions at the universities of Innsbruck and Munich. He has written several books and numerous essays on the contemporary history of the Südtirol and on the history of the Secret Services.

Studien Verlag was founded in 1990 in Innsbruck with the aim of making academic research accessible to a broader public. With additional offices in Vienna and Bozen now and publishing around eighty new titles every year in addition to its twelve acclaimed journals on history, education and media studes, the publishing house provides a forum for current academic discussions, controversial themes and interdisciplinary perspectives.