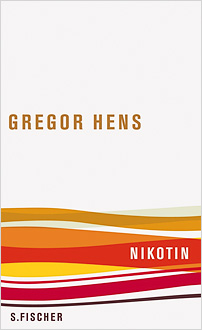 by Gregor Hens
S. Fischer
March 2011 / 192pp
Biography and Memoir
Download this page as a PDF

Irresistibly humorous, eminently readable and concerned with a contentious issue that continues to be hotly debated, Nicotine is the fascinating autobiographical account of one man’s addiction to smoking. Writing with the passion of an obsessive, the author analyses how his addiction has shaped his thought and behaviour patterns in ways that would initially appear to be entirely unrelated to cigarettes.

Hens grew up near Cologne, attended a Catholic boarding school and lived for a time in Berlin before settling in Columbus, Ohio. His parents both smoked intensively and he was given his first cigarette at the age of four or five. He recalls a revelatory moment of clarity and self-awareness, when he first looked at himself from the outside and realised that life consisted not of episodic experiences and emotions, but of a connected whole whose elements could be understood and narrated. It is a state of mind which he has come to associate with cigarettes.

In one of the book’s funniest episodes, Hens recounts waking up in hospital after having crashed his bicycle into a lorry at 40kph. He hadn’t smoked in years and, once he was able to walk again, he dragged himself to a corner shop and bought a packet of cigarettes. As he lit up and inhaled, he found himself weeping with joy. Nicotine proceeds from here via numerous anecdotes to how his father, having smoked eighty a day, abruptly quit and then began to hold himself up as an example of superhuman will-power.

Hens conducts a number of experiments on himself, such as imagining a packet of cigarettes in front of him and resisting the urge to light up, something which produces such a strong reaction in him that he has to stand up and leave the room. He visits a hypnotist but worries that he knows too much about the techniques of hypnosis to be susceptible to it. This visit is described in great detail, especially in terms of how the hypnotist’s technique of creating momentary uncertainties about where he is or what he can hear overlaps with the author’s own academic work on syntax.

Moving towards its conclusion, Nicotine becomes ever more explicitly a discussion of the nature of habit and of decisionmaking. Smoking has changed Hens’s brain functions irreversibly, but he asserts his ability to learn new ways of thinking and of living, and so finally to conquer his addiction.