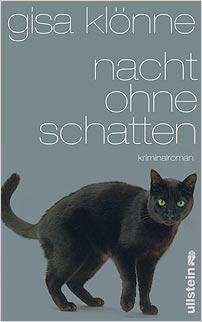 This third outing for police detectives Judith Krieger and Manni Korzilius (the first won its author a Friedrich-Glauser– Krimipreis best debut nomination in 2006) starts with the gruesome murder of a train-driver in Cologne. Then a pizza fast-food restaurant nearby explodes and the only survivor is a young abused woman who had been locked in its cellar. It is not yet clear if and how these cases are connected. During her search for traces or witnesses, Krieger follows a lead to a nearby former factory building, where a group of artists have rented studios some of which offer views onto the scene of the train driver’s death. But one of the artists, Nada, who might be a good witness, has mysteriously disappeared. In the meantime Judith’s colleague Manni follows a lead to the prostitute scene in Cologne, since the survivor of the arson at the pizza place was obviously a young Russian prostitute, Svetlana, who came illegally to Germany and was forced into the trade. The detective’s visits to various brothels and other such haunts show how brutal and dirty this business is. Prostitution in Germany was legalized in 2002 in order to improve the conditions for the prostitutes, but illegal prostitution is still a major problem in the cities. This gives an extra dimension to the book because Judith used to work for a so-called ‘Frauenhaus’ (battered women’s shelter). Now a former colleague agrees to put her in touch with Olga, an illegal prostitute also from Russia, who knows Svetlana and leads the police to the pimp Popolow who organizes the transport of under-age girls from Russia to Germany.

The novel keeps you in suspense from the first page on. Very well written and meticulously researched, it draws a thoroughly realistic picture of police work and those involved. The main characters carry on very much as in the two earlier volumes. They sleep too little, work too hard, smoke too much, drink too much – but they come across as very alive. Prostitution in Germany may be a special case, but the problem itself is worldwide. This series really should take off.

Gisa Klönne, born in 1964, has an MA in English language and literature. She is a writer and journalist, in both of which fields she also lectures. Her debut novel Der Wald ist Schweigen (‘Silent is the Forest’) was acclaimed in the media as well as by the general public. With her second novel also featuring Detective Judith Krieger, Unter dem Eis (‘Under the Ice’) she further widened her fan base. Both novels are currently being translated. Gisa Klönne lives in Cologne.

Ullstein Verlag was founded in 1877 in Berlin by Leopold Ullstein, who built up his fine reputation by publishing both newspapers and books. The writers and journalists who were published by and worked closely with Ullstein Verlag in the past include Theodor Wolff, Alfred Kerr, Vicki Baum and Franz Blei. Today the firm’s focus is on German and international fiction and non-fiction. After several moves and structural changes Ullstein Verlag returned to the centre of Berlin in 2004. The newly established group Ullstein Buchverlage comprises the imprints Allegria, Claassen, Econ, List, List Taschenbuch, Marion von Schröder, Propyläen, Ullstein and Ullstein Taschenbuch. Ullstein Buchverlage is a subsidiary of the Swedish Bonnier media group.